Rewriting the Novel: Chapters 1 and 2

Well, this this latest version of Jerry's novel launches by letting you know all about all the characters, and frankly I can't tell who the main character is anymore. And really, I don't know which is better: getting a fifty-page long textbook on oil derricks in chapter six or thirty-five pages at the start.

What I like best is that he has a technical editor now, someone who is an expert in the oil drilling trade, who is a little disgusted at times with Jerry's lack of knowledge. 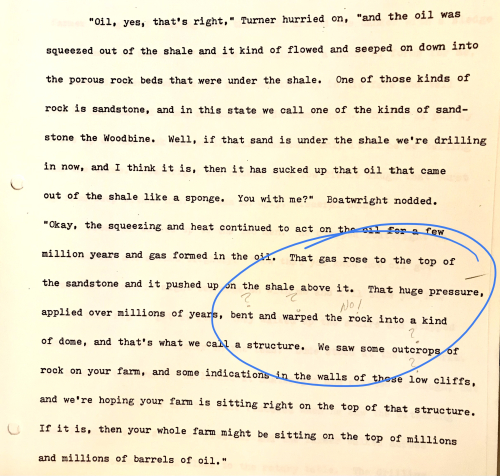 I have to assume the editor who says "No!" is Jerry's father Ellis, a.k.a. "Grandpa Son" -- he was a roughneck. Of course, I'm imagining that because I've grown bored by imagining a relationship with Jerry through this book, and now I want to rope in my absent grandfather.

I imagine Grandpa Son would be proud that I already knew how to pronounce the abbreviation for blowout preventer. ("Bop.")

... but probably sad to hear I learned it from Wikipedia.

Posted at 08:28 AM in In Which We Mock Ourselves | Permalink

A technical editor!!! And that is fascinating: Jerry as subject of acting rather than actor.

KC - and the subject of criticism, too. I like it.