I vaguely remember blogging about Gary's experience with the crash of Ozark flight 809, but I can't find it. I apologize if I am telling you this story as if you haven't heard it before.

It comes up because last week Gary told me the story as if I hadn't heard it before. The first time I heard it we had just started dating, and I was skeptical. I was skeptical because I was 19 and in college, and I knew everything, yet somehow this crash was news to me.

Of course, it had happened when I was 11, so I asked my Dad, and he confirmed that there was an awful crash by UMSL grounds and this Gary fellow was not lying to me about this one specific thing.

It happened when Gary was working at Normandy Osteopathic Hospital. He said the staff was all called into the emergency room because there had been a plane crash right across the street. 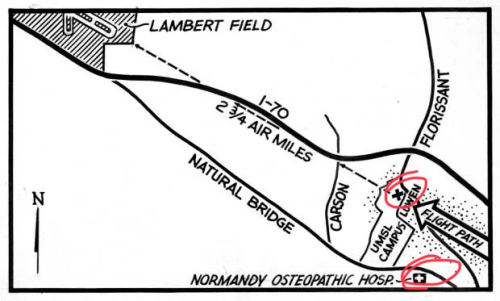 Gary said he remembers the rain blowing into the ER, because as an orderly his job was to mop it out. At first he was mopping, and then he got a push broom and just started shoving the water outside. After a few hours he was shoving more blood than water through the open door.

Now, forty years ago I would have been skeptical, and kept my mouth shut so as not to sour my budding relationship, but last week I said, "Are you telling me the storm kept blowing the doors open? Weren't they automatic doors?"

"The doors never closed, because the firemen and police kept carrying in bodies on the airplane wings and parts of the plane fuselage."'

"Oh, come on. There is no way an airplane wing would fit in an ambulance."

"An ambulance? No, they just carried them across campus."

"There was no rush, they were all dead. They just stacked them up in the hallways when the morgue was full."

You can see why this sounded iffy to me, especially since I didn't have an iPhone and Wikipedia to check out the full story, minus the dramatic details.

For the full story, with a slightly lower body count but additional dramatic beagle-related details, check out this article from the Post-Dispatch archives.

Posted at 08:13 AM in In Which We Mock Our Husband | Permalink