A few days after Dave died I woke up in his bedroom and noticed the window.

"Well that's cute," I thought. "There's a little window seat there. I've always wanted a house with a window seat," I sighed. Then I realized: I'm Dave's only relative, so technically, I do have a house with a window seat.

Only I don't, because of probate. I spoke to a realtor about repairing and selling the house, and that process can't start until probate is over. I can't even get the locks changed. Because it's not my house. And fair enough, I can see the sense in that. A probate lawyer is working on it.

The lawyer is also working on this: 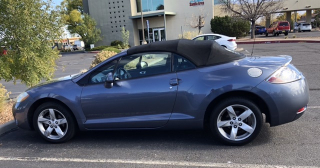 As I was driving Dave's cute little convertible, it occurred to me that I am not insured to drive that car, and more important, I was driving a car I don't even own. New Mexico makes you wait a month before you change the title after a death. And even though I won't end up with it, and I know who gets it next, I have to get it first so I can sign it over.

And I know it's tacky to talk about such things with Dave only three weeks gone, but those three weeks felt like three months.

Posted at 08:20 AM in In Which We Set Ourselves Up for Mockery | Permalink

Not tacky. This is all weird and hard and complicated and annoying, and grief eliminates exactly zero of all that, generally (usually just makes it all worse, complicated-wise, at least).

That is a nice window-seat, though! Also a nice car. Pity both are in New Mexico.

KC - not actually such a nice car. Thee interior door handle has fallen off and even Gorillla glue doesn't keep it on. And the drivers seat is torn. Plus it's old. The blue book value is 2-3 thousand. But it looks great, in fact Dave's Christmas present last year was a new passenger side door. (For the ladies.)

Oh, that is unfortunate. Can the handle get a splint, or a bone screw sort of thing?

KC - it's going to someone who is very handy, so it will be his problem. I was just rolling down the window and using the edge of the door to close it.