Two days ago I saw a truck in our subdivision marked "U.S. Infrastructure" and I thought that was pretty cool.

Yesterday I noticed that an area on our street was marked off by cones.

Today I noticed a large pile of gravel blocking our driveway. 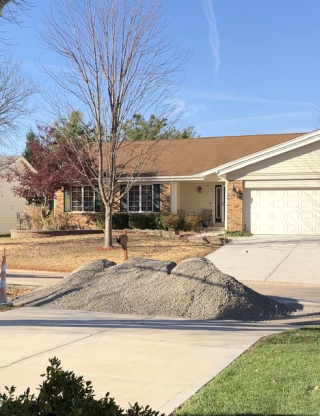 Could have put it where they parked their trucks, but no.

I walked out to the driveway and employed some pretty loud body language to say, “When is this nonsense going to be over?” It was over when promised, in less than fifteen minutes, during which of course Gary’s phone rang. Luckily, no one was summoning him.

It amazes me that if a roof is to be torn off or a door or fireplace repaired Gary feels it in his bones, but if the street is torn to bits he loves it for the entertainment value.

It amuses me that as he day has gone on it is evident this nonsense is so that AT&T can upgrade their cables. ATt&T trucks everywhere. It would be especially amusing if they were putting in individual landlines for us old folks. I canceled my landline service, since my biggest landline user died. What if I was the user that tipped the scales, though, early last month? Poetic justice.

Posted at 08:31 AM in Miscellaneous Mockery | Permalink