I relocated a few of Dave’s things to Saint Louis. There was Jerry's final draft (which I am still reading), several old Mad magazines, and then two other things.

Mom, as you may remember, had limited use of her arms because of the polio. One arm had a good elbow but a hand that didn't work, the other had a bad elbow but  a good hand. When her friends bought her a heavy mug for Christmas, she explained that perhaps they could enjoy the mug when they had their regular breakfasts at her house, but it was too heavy for her. And then they bought her the heaviest whale mugs imaginable for years and years, the end, until she died. They took some of the whale mugs, and Dave and I divvied up the remainder.

So now my collection has doubled. 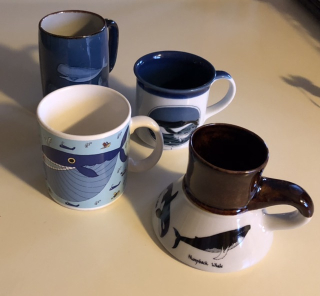 I didn't even know Dave had a NASA t-shirt until I was sorting through all his clothes, and I saw it, and immediately said "Mine." 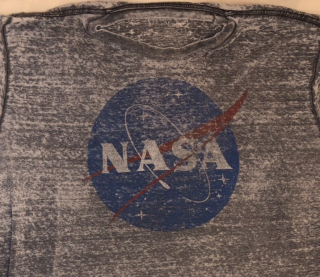 This thing is gossamer. I believe once it was a normal t-shirt and then all the warp wore off, or the woof. (Wooft? Weft?)

I wore it to work during one of our rebellious roundneck Fridays. (Every day is casual Friday now, so on Fridays we can only relax by wearing t-shirts.)

I said "Check out my cool NASA shirt."

Half the team has the same shirt. I thought I was special.

Posted at 08:56 AM in In Which We Set Ourselves Up for Mockery | Permalink

Tshirts are knit, so there isn't warp and weft/woof, just a single yarn knit. For mixed-fiber t-shirts, it is possible for nearly all the [one fiber] in the yarn to be washed/worn/chemical-reaction/moth-eaten away and nearly only the [other fiber, usually plastic] to remain.

I bet none of *theirs* is gossamer-thin!

(were the whale mugs 1. a mistake [an aunt was under the impression, for over a decade, that I looooooved frog stuff], 2. a joke [here, there's this thing you've specifically said you can't use but that you keep around to remember us by! here's another one!], or 3. something else?)

KC - You are right, when I look closely it looks like a grid of grey plastic with tufts of fabric peeking out. And I am certain the mugs were a joke, as if they were stubbornly not listening to Mom.