The pebble-dash elementary (Graham elementary, corner of Graham and 270, I need to drive by and see if it still exists) made me think of other dangerous buildings of my youth.

The most dangerous was the Catholic church we briefly attended when we first came to Saint Louis after the divorce, before they discovered the remarriage and refused Mom communion, at which point she said, fine, I'll raise them as atheists then.

It was St. Martin des Porres, and the roof looked like this: 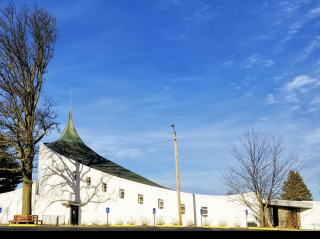 Yes, a big green slide from the steeple to the vestibule.

Even worse, that church was mere blocks from this enormous slide. 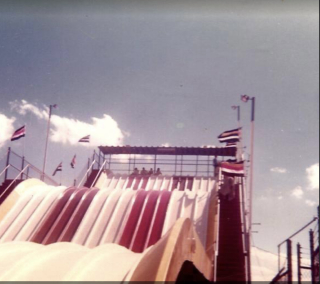 See the tiny people on top? Those are Catholic children driven mad by going to God's Green Slide every week and never being allowed on the roof. I am astonished Protestant children weren't driven mad by the juxtaposition and that just bumped up attendance at the big slide, which lasted quite a while until a child was injured.

I only went once and I was so scared the attendant put me on  his lap and slid down just to get the line moving again.

Posted at 08:36 AM in In Which We Mock Ourselves | Permalink