I was watching the most recent episode of The Great British Baking Show, in which people are tasked with portraying their childhood homes in cake, and they joked there might be a lot of buildings covered in "pebble-dash."

I looked up the term immediately, as I do so often during the Baking Show, and saw the image below. 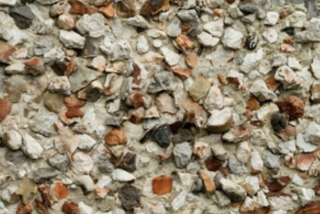 In all my life I have seen precisely one pebble-dash building, but the one I saw was my elementary school from second to sixth grade.

For the first time I thought about pebble-dash as an adult, and for God's sake, why the hell would they coat an elementary school in sharp gravel? Because those aren't pebbles, I can tell you. The thing to do was to take a ketchup packet and impale it on one of the many sharp pebbles sticking out of the wall bordering your playground, and then remove if after it wept out a trail of "blood" in a convincing Halloween tableau.

As best I know there is only one building covered in this nonsense in Saint Louis. To think it's common in Britain is alarming. I think a few people on the British Baking Show fashioned pebble-dash out of raisins and nuts or some safe material. Not realistic.

Speaking of the Baking Show, Netflix has a Junior version of the show, with different hosts but also with children as the contestants and so far, three episodes in, it is delightful. Droll British children rubbing their little hands on their brows and saying things like "But my Mummy says she likes my baking" in very serious tones. (No one actually said that, but they think it, you can tell.)

Posted at 08:45 AM in Miscellaneous Mockery | Permalink

My grandparents had a smooth pebble-surfaced dining room and it was *glorious* - like they'd put all the pebbles through a rock tumbler and then sorted them very tightly by size so they were all the same height. You have the cool of stone and the surface isn't unpleasant to bare feet, but it's also really pretty and an interesting [not hazardous] texture to run your fingers over. i can almost guarantee that a vertical wall wouldn't end up that smooth, but maybe UK pebbledash is at least somewhat closer to that than to your elementary school? One hopes?

KC -if only they could have tumbled the gravel at the school. That floor sounds lovely,