Well, I took a step toward covering my dreadful hair. 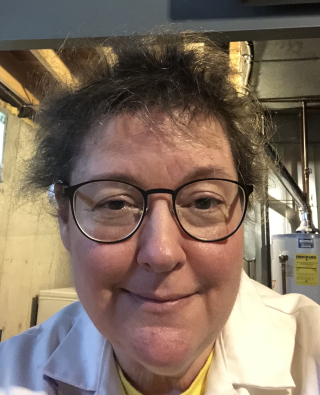 I purchased what my mother would call a "wiglet." Just a little mammal to perch on top of my head and cover my now-significant bald spot. Sadly, it also has heavy bangs.

I have named the wiglet Moe, for obvious reasons. 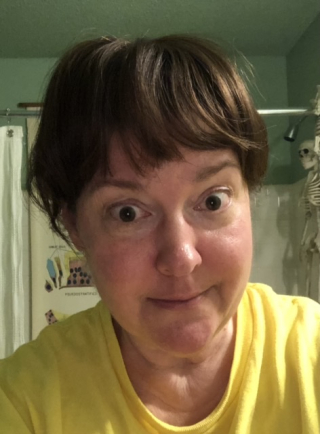 Moe may or may not be going back to the wiglet farm. I was expecting Gary to mock me, and he didn't.

So far Moe has taught me that no one with human hair as thick and shiny as Moe would ever need a wiglet. Also, the clips that attach Moe to one's own hairs are pretty durable; I could take Moe to the Mosh pit.

I'm still on the fence about Moe. For the time being I can dodge the question of the wiglet reveal. How do you let people know you are wearing fake hair?

I considered a Zoom background with arrows pointing to my head that say "FAKE HAIR" and "SHHH" and "DON'T STARE AT THE HAIR."

It made me wonder how wig reveals happened during history. Let's say the 60's, when Mom was 30 and rocking her wiglet.   Did my Mom wear hers with defiant pride, her eyes daring her co-workers to say something? Or did she wait until the first day of a new job?

I don't know. Gary really surprised me by not doubling over in laughter. I would feel better if I could thin out Moe's luxury, make Moe look 50 instead of 20.

Perhaps I could buy Moe a brother. Maybe Curly!

Posted at 08:38 AM in In Which We Mock Ourselves | Permalink

I gotta tell you, I think i looks terrific on you. Cute and not fake looking.

When one of my grandmothers-in-law got a wig (white perm), I thought she'd just had her hair "done" especially fancy, until she pointed out that it was totally a wig. (we went to see them around 2 times a year, though, rather than daily zoom calls. *But* zoom is mercifully blurry, so there is that)

I agree that it'd be nice if there were wigs/wiglets that mimicked less luxe hair while not looking like Sad Wigs, but presumably that's hard with the strand thickness being greater for wigs than for head hair?

Anyway. I like your current Chaos Hair as well, and every baby step towards normalizing women actually aging (gasp) is maybe a baby step in the right direction, so there is also that. But Moe is indeed cute on you! (and if you wanted, you could keep Chaos Hair while also covering Bald Spot by wearing hats. Celebrity Hat might get jealous of the plebian daily crew, but it's an option?)

I think it’s great. Take it to your hairdresser for styling if you want it to look more like you and less like Moe, (which it doesn’t).
Barbara

Kathy Potvin - I have done more research and it appears what I need is a "low-density" bit of artificial hair. (Though to be fair to Moe, he isn't fake, some tremendously blessed person grew that on his or hear head and it was sewn into Moe.) Evidently there are several factors: the width of the donated or synthetic hair follicles, the density with which they are packed together (usually 130%-180% tighter than human hair), and finally something called perma-tease that covers the skullcap, and gives you the oomph that makes it a tell-tale wig. One brand does sell fine hair with normal density and no perma-tease, but it's too pricey for experimentation. Maybe I'll pluck Moe so he's less dense.
KC - Well, there's aging, then there's a King Charles IIi level of baldness at the crown. As for hats, I certainly have enough. Only a few are casual hats. One nice thing about Zoom, you're never asked to turn around and expose the back of your head.
Barbara Lenonard (hi Barbara!) - I haven't seen a hair stylist in three years, because the crazy hairs fall out when they realize they are expected to grow more than a few inches. I am just baffled by wig styling: evidently some wigs melt if they get hot. I supoose you don't style them? Mom's Angie Dickenson wig is still holding its shape after sixty years.