Surprising Family News from Mom Beyond the Grave

So, what I wanted to write about was how distressing it was that the renters painted the fireplace that I grew up scrubbing with ACID to clean while retaining the original color.  That made me start thinking about the Japanese tree mural my long-dead Aunt Dolores painted in the foyer of the house on Jamieson Ave. I wanted to post a photo of that foyer, so that led to all the dozens of photos of mom, Dolores, and my Granceil (Grandmother Lucille).

I never found the foyer photo, but did find a wall painting Dolores did for, I suppose, a boyfriend. 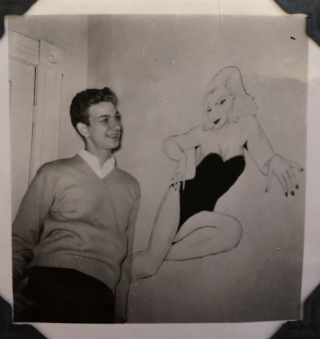 However, that was not the most salacious thing I found.

I found this photo of Granceil with the long, LONG dead son Jimmie. 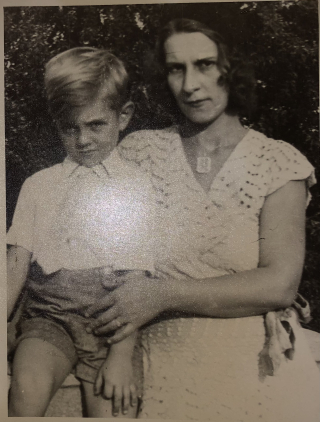 The family chronology is that Jimmie died of a contagious illness in the 1930's, then Mom got polio, and then my grandfather Earl couldn't take it anymore and became an alcoholic. My grandmother soldiered on, but soon tired of Earl drinking his paycheck away. She eventually divorced Earl and then met and married my step-grandfather Arthur in the late 1940s. 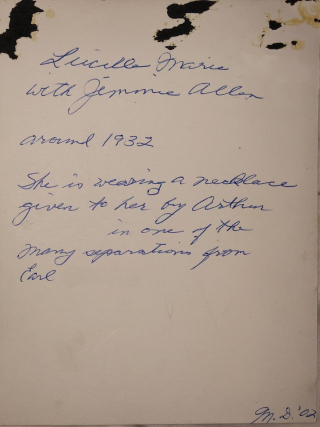 "Around 1932 ... She is wearing a necklace given to her by Arthur in one of the many separations from Earl."

Wow. Wow. So, the love of the step-grandfather Arthur dated back to waaaay before I had been told. She was seeing him before Jimmy died, before Mom was born, before Mom got polio at 13, before Earl became an alcoholic?  Wait what? If I shook my head right now, it would sound like Looney-Tunes slide-whistles.

And I don't remember Grandceil liking either man. She had bitter complaints about them both. No wonder she looks so unhappy.

Posted at 08:52 AM in Miscellaneous Mockery | Permalink