I was complaining to Gary that recent Covid developments are going to make it so I can't go to the opera.

"Don't be stupid," he said, sympathetically, "Just sit in a booth by yourself."

"Yes. One of those booths they have. And don't share the booth, and double-mask, and you'll be fine. I mean not now, but maybe later."

I just stared at him, about to say, "A booth? Do you think the opera's like a diner --" when I realized he meant box, not booth, and that even more amusingly he thinks the Saint Louis Opera has opera boxes full of wealthy women in furs and eighteen-button gloves, and that I would just take an entire "booth" for myself. 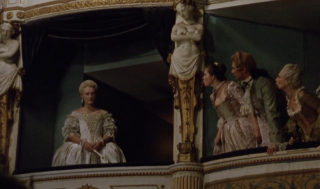 Posted at 08:14 AM in In Which We Mock Our Husband | Permalink

I do highly endorse fit-testing an n95; spouse went to DC and back for a colloquium (only eating/drinking outdoors or alone in his room, so keeping the mask on and tight for all shared-air interactions) and: zilch.

Inspired by my experience with the PT center whose Glade Plug-Ins I was allergic to - but didn't know I was until I took the mask off in the car and immediately had sinus/breathing trouble from all the stuff it deposited on my skin and clothes - we used an air-freshener that I couldn't smell through the mask, but could *gasp gasp cough I didn't realize I'd sprayed so much* smell with my mask off. Not the same as hospital grade, but I figure it's pretty decent.

(that said, I don't like opera enough to take that risk, and also you do need to Not Drink for the time you are indoors (because in the bathroom or wherever, even if no one is in there right now, someone may have been coughing up a lung 10 minutes ago in that space), and you can accidentally knock the mask partly off and get a sip of unfiltered air if you are clumsy, *and* it does not protect your eyes. But. Maybe.)

KC - well, the neuro did say if it is outside I could get away with a good mask, but then again this was a doctor who did catch Covid himself. (Well, I imagine he caught it from his family, when he wasn't in a mask.)

Yeah, doctors often catch things through (or share things with) family. And also they sometimes catch covid in the break room when they scarf lunch or drink water (a friend's entire migraine-doctor clinic came down with omicron at the same time presumably for this reason). While keeping your mask fully sealed to your face 100% of the time you are indoors with air someone else has recently breathed is feasible for some things, like going to the opera, or working somewhere with easy access to outside, it would not be for the average workplace, and most people who "wear their mask the whole time" still move their mask to drink water, etc. (I am totally *fine* with people doing that when that is a risk they are comfortable with and as long as the people they are with are *also* comfortable with that risk, but it quite simply isn't "the whole time" and that messes with actual-efficacy things).

I mean, there's also apparently some info that omicron lives on plastic/skin longer than Original Covid did, so that's once again a route of potential transmission, sigh. But anyway: I am pretty comfy with the n95 that reeeeaallly doesn't let any air around it (it leave a mark on my face all the way around the perimeter; this is not ideal, but reassuring) and that does not allow some fragrances through at all.

Also, all the recent medical people I've seen in person have only been wearing surgical masks, not even KN95s and I am a little perplexed by this decision, but whatever, maybe they are all low-ish risk? But over here, so far, so good, and we'll see if it holds...

KC - it is truly remarkable doctors rely on hand-washing and masks how, especially remembering how they were decked entirely head to toe in protective gear before. My brother caught a superbug in a hospital and suddenly everyone he saw was bundled up. I would be terrified if I were a doctor.

But yeah, I don't understand doctors who have not had omicron just wearing surgical masks. (but: a lot of them have had omicron at this point, so that also changes things?)

KC - thankfully, they;be stepped in and made plenty of knots. And baby formula, too, evidently.

I am hereby perplexed. Knots?

KC - I ... I have no idea what I was saying there. It was six minutes after bed time?