A few nights ago I heard odd whooshing and banging sounds outside the front window. I thought it was my neighbor to the East, slamming car doors and trunks. Then I heard a bang loud enough to make me scream and jump.

I peeked out the window and things were calm to the north. I looked out every window in the house, and the only odd thing wasn't a noise, it was a color.  The pear tree -- which had just bloomed all white that same day -- was now lit up like Christmas. Well, if the Christmas colors were orange, yellow and red.

Some of you now know what was going on. I've never been in this situation, so I was unaware.

I had looked through every window, so all I could do was look out the front door and ...

I got Gary so we could both be horrified by the flames leaping as high as the peak of the garage. The truck was firing out missiles, too. Gary immediately decided the man had been hoarding cans of gas in his truck bed and they were exploding.

Another neighbor came out to tell she'd called 911 and they knew already ... and on cue we heard the sirens. We hid inside and watched the disaster through the blinds. 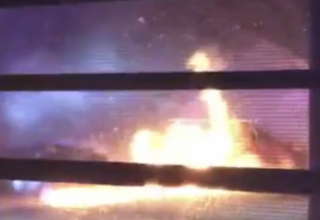 The next day there was no evidence but a truck that was half shiny cab and half gutted grey truck corpse.

Posted at 08:52 AM in Miscellaneous Mockery | Permalink

Well, that's alarming. I am glad there was no further damage, though!

KC - all the neighbors are talking about it and no one knows what caused it. The burned-out truck does not seem to be going anywhere.