« Gary Drives | Main | Mom Speaks Again From Beyond the Grave »

Sometimes you meet just delightful people when you are working. 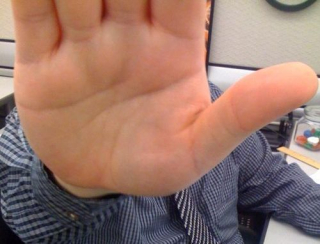 Only photo of Steve I have, appropriately

He changed departments about six years ago, and we’d catch up in the cafeteria, but it wasn’t the same as working every day with Steve, because Steve was hilarious on a daily basis, and I was lucky enough to sit next to him in all the seating charts.

I didn’t know him at all until the first time I emailed him. His immediate reply was “Stop emailing me.”

Just for a moment, he tricked me. I was concerned that I had stepped over some line during the month I had worked by him, but no, that was just deadpan Steve.

People at work were gobsmacked last week to hear Steve at Work had died, and then surprised again to hear it wasn’t from Covid, but instead from an aggressive bone cancer that took four months to progress from “a toothache” to death.

So here, I give you the Steve at Work Blog Compendium dating back to 2009. He read the blog and at times commented under an alias.

The boldfaced posts below actually star Steve, and below that are the ones in which Steve is a supporting player. I want to use them all as a reference when I get old and don’t remember my friend at the next desk.

Steve eats at a food truck

Steve shaves his head too hastily

Steve steps up and eats his odd breakfast publicly

Steve laughs at my idiocy

Steve tries to correct my idiocy

Steve stays quiet about the baby

Steve mocks two idiotic things I did in one conversation

Steve is a target of soup cans

Steve and I bet

Posted at 08:16 AM in In Which We Mock Our Employers | Permalink