I have a tight relationship with the pit bull mix next door. She hears my garage door come up, knows I am outside gardening, runs for her owner and allegedly whines until he lets her out. He refers to it as a stalker relationship but I don’t mind. I stick my arm through an irregular gap in the fence, she positions herself on the other side, I rub her belly. Good all around.

The owner said that the dog has taken to mauling birds. I know, harming small animals, add to that the stalker tendencies and the pit bull reputation and we have a serial killer dog next door. (She doesn’t say much; kind of keeps to herself.) The owner accused the dog of maiming small birds she sees pecking in their lawn.

In fact, later that day our belly rub was terminated when the dog heard a bird chirping and stood beneath the tree, daring the nesting bird to come peck at her lawn.

I went on with my gardening, and in the process flushed out a small bird hiding in my back bed with the arbor and the bird bath (immortalized in this week’s painting). As it hopped out of its hiding space I saw its wing wasn’t working. It hopped up on the the arbor. 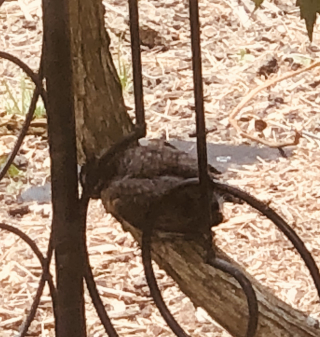 I set out some water and decades-old sesame seeds from the spice rack. Baby bird ignored it. It devoted all its energy to cheeping “ARE YOU MY MOM” at each bird that came to the birdbath. I abandoned my gardening, pulled up a chair and spent the next few hours watching the Baby Bird Show.

After fifteen minutes in, Baby Bird began hopping wildly and opening its maw and Momma bird  swooped on with half a worm, jammed it down her baby’s craw, and flew off in what I interpreted as disgust. Then, every half hour Momma Bird would return with an insect or a worm.

I began to think of how Baby Bird would adjust to its new life on the ground. Momma showed up with three worms at once and jammed them all into Baby Bird’s gullet. “Oh, this is hospice,” I thought. Baby Bird sat there dazed with a worm tail hanging out of its beak.

Gary came home and said, “Don’t get attached to this bird.” (I mean, it’s not like a raccoon.) I began referring to Baby Bird as Fox Snack, because I didn’t see much of a future there on the ground with the fox and the raccoons and the pit bull.

Sadly we had a horrific storm that night and Gary did not see the baby bird or the Tupperware when he inspected the back yard for damages. No more baby bird.

Posted at 08:41 AM in In Which We Mock Ourselves | Permalink