I was under the impression that I had seen Sabrina starring Humphrey Bogart, Audrey Hepburn, and an oddly blonde William Holden.

I thought I had seen enough scenes piecemeal to put together the plot, and Gary thought he had as well, and evidently we had never seen a bit of this movie. I mean, what we did actually know, “Love triangle with men too old to be in a love triangle with Audrey Hepburn” still held up, but the comedy element was a surprise. Also the plodding in the second half was a surprise.

Gary has a nice quality in that he sees a beautiful model or actress and checks out any supplemental body part he might criticize. The more lovely the woman, the more criticism he gives her earlobes or elbows or lower teeth.

So every time Hepburn looked particularly head to toe luminous, Gary would shriek “MY GOD LOOK AT HER FEET THEY ARE BOATS GOOD LORD.” 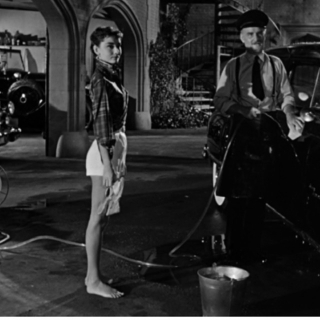 I think of her as petite - imagine being petite with giant feet. WikiFeet puts her at 10 and a half shoe size.

Posted at 08:35 AM in In Which We Mock Our Husband | Permalink

The main thing I remember: More Skeezy Dude being more or less forced to sit down. On the glasses in his back pockets. Which Less Skeezy Dude knew were there. Glorious, and may it happen to all Skeezy Dude Plans...

KC - that’s right, the champagne glasses. That part was good.