This happens to us every 16 years or so: we go from the old generation of a vehicle to the new one and experience the wonder of what’s happened to vehicles recently.

I said, that’s too much magic for me today, and pulled back in. I’ve decided I can accept one weird thing each day. Yesterday it was the realization that if you leave it alone in the garage for a few minutes it entertains itself by throwing a illumination advertising on the garage floor. 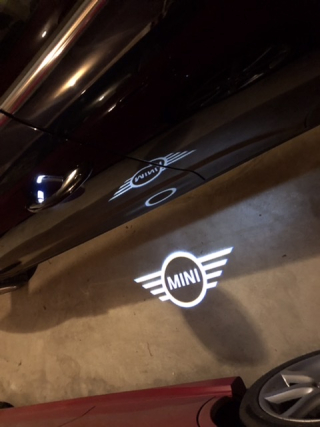 That was yesterday’s magic. And, honestly, that was a little scary too. “It knows its name! It’s sentient!”

Speaking of scary, I was initially interested in the fancy wheel covers that resemble a UK electric outlet. I had no idea they were initially called the “Corona” model. 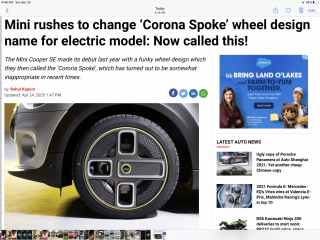 Imagine being reminded of the virus every day for the next 16 years.

Posted at 08:32 AM in In Which We Mock Ourselves | Permalink

I... do not like... things being done automatically, unless there is a manual override option so that if the sensor gets "confused" I can turn things off/on as is *actually* applicable.

Well, also, sometimes our windshield has this specific sort of tree crud on it where if you run the wipers unless it's *really* wet, visibility disappears for a bit, so we deliberately don't turn the wipers on until the windshield is wet enough to wash the tree crud off, rather than just for a drop or two that doesn't harm visibility itself but will when it's smudged around. But maybe the Mini has technologically-advanced out of tree crud, too. Or maybe they just assume that people, you know, keep their cars in garages and wash them regularly...

KC - I was surprised that it didn’t clear off the back window by the time I thought it would, so I did it myself. So the wipers can be manually controlled, but stopped? I don’t know. I bet if I took control the auto-wipe would stop. The lights don’t matter - they could be on all day and not hurt anything.

I love that so much - such fun!