Well, Gary won the battle of the loveseat. I have given up and now every morning I rearrange the living room. I have let it go.

I had to let it go becuase there is a new battle front: the Battle of The Spinning Utensil Holder. 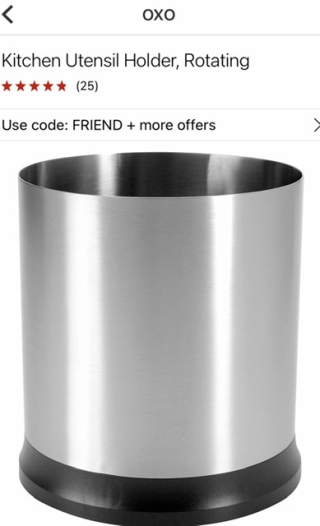 At some point when Gary was cooking he bought this so his spatulas / spatulae would all be in easy reach. Since he got sick, he has taken a giant step back on the food prep, so I decided that since I am the only one using the utensils, I decide where they go.

He had decided to place them  next to the microwave, so when you spin them they bang into the microwave. I took a firm hand and re-prioritized the kitchen. The Sous Vide container in front of the toaster went under the sink, replaced by the spinning spatula thing. Spatula carousel?  Ladle-go-round?

The next morning I woke up and the spatula spinner was no longer where I put it, spinning freely in front of the toaster. Why? “IT BLOCKS THE TOASTER.”

Even though I thought this was a good compromise, the next morning I woke up to “DON’T THINK YOU'RE FOOLING ME WITH THIS TOASTER THING.”

Posted at 08:24 AM in In Which We Mock Our Husband | Permalink

Oh, dear. This would not be my preferred communications/compromise methodology at ALL.

(also: yes: the one who uses the things is the one who gets to decide where they go, etc. Although augh I wish I could convince spouse to not put sharp knives in the dishwasher, where they get blunt more rapidly. But mostly we get along well with compromises where applicable and a whole lot of deciding not to care that Spouse Spaces are not arranged maximally efficiently, etc.)

KC - now see, Gary loves sharpening the knives, so there’s no way the argument that something is knife-dulling would have any weight.

If someone sharpens the knives, then they're welcome to dull them! I mean, within limits. Kind of like dish-dirtying: if someone else is going to wash the dishes, then it is relevant for the cook to not dirty twice the number of dishes needed for a recipe. If the cook is going to wash the dishes, they can get nearly every dish in the kitchen dirty, and that's *fine* because they're cleaning it up. (I mean: potentially annoying, in a "you are being inefficient!" way, but really: fine.)

We just have been having progressively duller knives. But now we have a bench stone and I am learning/have learned the basics of how to use it, so the knives are now making progress towards being able to slice carrots again...

KC - i have given up questioning Gary’s inefficiency on dishes. He runs the dishwasher even if it hasn’t been unloaded. He did us a great favor though by spotting that running the dishwasher makers the garbage disposer leak.