So, as I said yesterday, I’m feeling a little insecure about my appearance lately. That’s why I was delighted that Amazon chose today to deliver a device that will up my eyebrow game: an eyebrow template.

I have great trouble making my eyebrows symmetrical. I know how they’re supposed to look, and the best I can hope for is for each eyebrow and to look good on its own — but they don’t look like each other. I’ll have a round eyebrow on one side and an angular eyebrow on the other,  or Vice versa.

I narrowed down my Amazon choices to two eyebrow devices: 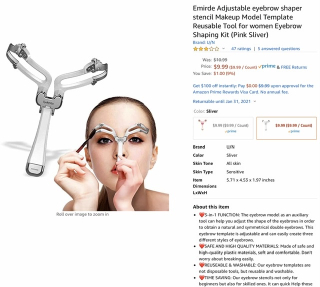 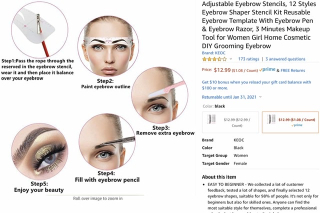 Both translations were equally bad, but “Step 5: Enjoy your beauty” made me laugh, plus I knew there was a chance that I wouldn’t adjust both sides of the eyebrow speculum the same, and I’d just be where I was when I started.

So here I am, and after reviewing all the templates, most of which expected me to have eyebrows growing up into my hairline, evidently I am a Seagull. It says Seagull Eyebrow right in the middle. 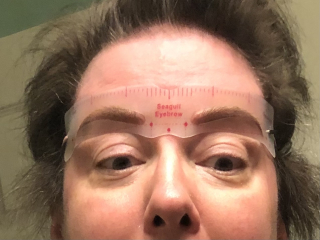 One thing I hadn’t considered, all these devices assume you have eyebrow hairs in generally the same area on both sides of your face. This thing made it obvious that one side of my face has now slid down a good quarter inch lower than the other, and if I wanted eyebrows at the same latitude I would either need to shave one off entirely and draw it in, or go crooked. Sigh.

I would not have vertical symmetry, but I could still aim for horizontal symmetry. 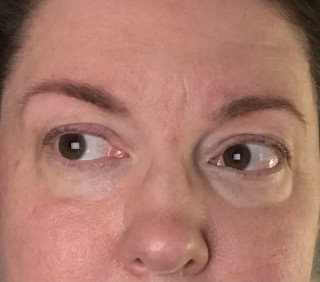 Not too bad. A seagull banking for a curve. Left face says “Really?” and Right face says  “why so judge-y, Left face?”

Posted at 08:16 AM in In Which We Mock Ourselves | Permalink

The devices may assume that you went all-in on the nearly-no-eyebrows trend and thus are so perma-plucked that eyebrow hairs ain't got nothin' to do with it anymore.

But yes, those look like reasonably good eyebrows? Did you spray-paint them on? I don't honestly know what sort of... artistic material... one would use with a template like that. (also, yes, absolutely no on the gynecology implement for eyebrows.)

KC - just drew a bunch of extra hairs in with an eyebrow pencil, which I then sharpened so they looked like less of a mass.