McDonald’s is here to say it will be offering a vegan plant-based burger called the McPlant. 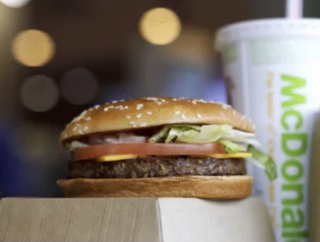 I am here to say, “been there, ate that.” I grew up on plant-based burgers. Our school district served soy burgers exclusively. 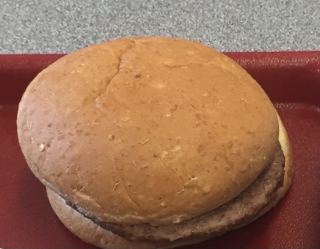 Perhaps next year McDonald’s will introduce another of my high school foods, the McRectangle: 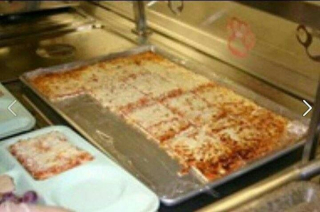 From the press release for the McRectangle:

“There are other pizzas out there, but the McRectangle delivers our iconic taste in a stick-to-your-teeth-kind of pizza," the company said in a statement. "It’s made with a steamed, flavorless “crust”,  ketchup-based sauce, and served on a plastic tray molded to fit the classic rectangular pizza shape.”

Perhaps then McDonald’s will serve up the Nike sandwiches.

(I don’t know if my school’s Nike sandwiches were as ubiquitous as pizza ala rectangle. I don’t know why the meat and cheese subs were called Nike sandwiches - either they were imported from Japan or it was a comment on something that weighed twice what you would expect it to, like Nike tennis shoes.)

From the McNike press release:

“There are other plastic-wrapped sub sandwiches you can heat in a special convection oven until hot enough to cause third degree burns, “ the company said in a statement. “People will go wild for the blast of flavor, which is ‘Gummy,’ with notes of ‘250 degrees Fahrenheit.’”

Posted at 08:33 AM in Miscellaneous Mockery | Permalink

I'm sure steamed rectangle pizza is a delicacy for someone, somewhere, but... yeah, no.

That said: plant-based meat substitutes have made a lot of progress in the last few decades (my predominate exposure to them in the 90s was when my sister became vegetarian); a friend recently went vegan and reports that some of the "chick'n" nuggets are pretty much dead ringers for chicken nuggets; so if the cafeteria soy burgers of your youth were horrible, there *might* be plant burgers now that are decent.

That said:
1. Vegan Friend reports also that there's a lot of variability between brands and products; there are still some lousy fake-meats out there, and
2. The possibility of the McPlant being better than the soy burgers of your childhood lays you under no obligation to try it out, and
3. The likelihood of a random McDonalds outside of a Vegan Mecca Location properly cooking its McPlant burgers for the optimal done-ness of that specific probably-slightly-oddball burger patty rather than doing the normal "we don't get sued if the patty is a hockey puck, we get sued if people get e coli" thing... well, I guess, buying a frozen Impossible Burger and cooking it yourself or ordering one from a fancy-schmancy place will be more likely to get you a positive fake-meat-burger experience, is what I'm saying.

(I mean: also: this is a great time to *not* be eating foods that may have been coughed/sneezed on by young, nearly-asymptomatic fast food workers, if your area also has a high current case load *and* a young fast food employee population like ours does.)

KC - I hadn’t even though of teenage sneezing. Technically everyone would be masked, but of course our area is not 100% compliant.

Yeah, in March we stopped eating anything that couldn't be either 1. quarantined for about long enough for the virus to die off or 2. re-cooked before eating, because hygiene/food-safety was just so bad locally pre-COVID and according to others' reports, that didn't really *improve* with the pandemic, just... changed.

Your fast food sources may be more compliant with food-safety regulations, though, so there's that. But I'd still probably dodge fast food in areas with a high caseload.

KC - that;s probably a good idea, or at least microwave whatever I get.

I have no idea how virus+microwave works (a virus maybe doesn't carry water molecules? not sure), but yes, that might do the trick if you got it decently hot. It would make lettuce very sad, though...

I’m addicted to the Burger King Impossible Whopper. If the McPlant is as good as that, I’ll be very happy since it’s much more convenient for me to eat at McD’s. What’s strange here is that McDonald’s experimented with a meat-free burger ages before Burger King. It was called the “McVeggie Deluxe” and the only place I ever had it was at McDonald’s Times Squre. If it’s as good as that I would also be very happy, because I loved it.

KC - Alexa says that cancer.gov says that if you microwave a virus it blocks the release of the virus from infected cells, so that would be ... bad?
Dave2 - I keep meaning to try the impossible Whopper in a taste-off with the Possible Whopper.