My MRI came back clean last week. No new lesions. Of course, that was useful before, but now I’m more concerned with brain volume, which wasn’t measured by this year’s MRI technician.

I can tell you exactly the white matter I have lost. I have lost the neurons that allow me to spell the word “because”.

Somehow my hands have lost the ability to type the letters of “because” in the right sequence. It always comes out with the same two letters transposed. 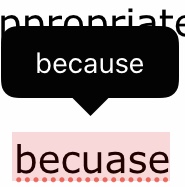 I’ve never had trouble with this word befoer. 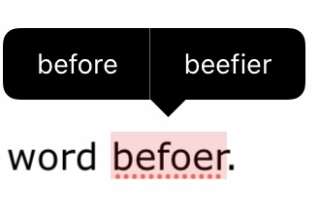 Looks like there’s a short in my “b followed by e” synapse.

I don’t have stellar typing, but it’s just so odd that my muscle memory has decided to fail on this particular word. It’s not the only word. I know to correct “form” to “from” every time I type that. Looks like I need to add “because” to the list of double-checks.

It might be because (did it again) I have begun to use “because” more often now that someone pointed out the distinction between “since” and “because” (again). I was using “since” exclusively, and now I’m just over-correcting.

Over-correcting doesn’t lead to auto-correction for some reason. Perhaps that’s all that has happened. Maybe auto-correct has been saving me up till now, but it’s sick of my lack of personal responsibility. Just because. Oh! I got it right this time!

Posted at 08:18 AM in In Which We Mock Ourselves | Permalink

Hooray for no new lesions! And brains are very weird.

I'd vote for "you haven't been using the word 'because' and therefore have no data on how you spelled/misspelled it before" - but it's possible that's only because that's the most optimistic of the outcomes presented? (if our brains or computers are saving up for revenge - depending on what you meant by autocorrect - I'm in trouble...)

KC - I wonder if autocorrect keeps track. I would like to see a report of words I cannot spell.

In Windows, you can have your autocorrect keep track now, in theory (to "see what our AI has helped you with!" and I say NO THANKS just because the fewer records that are kept on me, the better). I don't know about other things.

KC - I wonder where that list is? I tried to find it in Word but I could not.

Search in Windows Settings for "Typing Insights" - but hmph, I just looked at it, and instead of, as labeled, showing you *how* Windows has "helped you" it instead just tallies the number of items in each autocorrect-y category. (at least, it tallies things on my computer and all the tallies are 0; it's possible that more advanced information is available if you actually have things it has fixed for you)

I don't know of any autocorrect tracking features in Word, though, so if Word is doing it rather than Windows, you're probably *also* out of luck. Sorry!