Life in the Big House: the Miniseries

Gary has a journal. 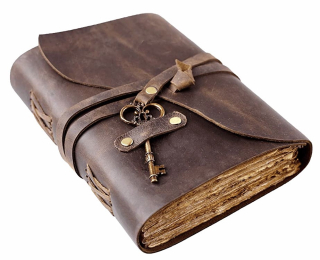 (He chose this journal because he is a goth tween.)

We had a conversation after it arrived.

He said, ”I think this has magical powers. I had a headache and then I smelled my grimoire and now my headache is gone.”

I looked it up, fully expecting to see it was coined by J.K. Rowling, but it is a word, and has been a word since the early 1800s, no less.

He plans to use the journal to document the plots of his very involved dreams, though he refuses to refer to it as a dream journal.

On page one he has written “PLOTS” in large letters. Page two is the first “plot” in which he is driving a car, and it falls into a lake, and when it hits bottom it crashes through to a void. He woke up while he was rallying the other void victims to escape.

Because he’s a lucid dreamer, his plan is to dream in miniseries style. Before bed he’ll read the latest entry in his grimoire, which will be his “Previously seen on” recap, and then carry on with the dream to see what’s next.

As I always say, this ability he has to control his dreams really freaks me out.

That journal! Not a big fan of LOTR (except for Viggo Mortenson) but my first thought was “my preeecious” lol. One gorgeous piece of work. (Both the journal and VM.) :-)