I think back to the days when I was first married in the mid 80’s, when I realized someday it would be the year 2000. I remember I wondered if I would have a house in the suburbs when we rolled over to the new millennia. I wondered what grocery stores and technology would be like. I wondered if we’d do anything more with the space shuttle.

I must have had a pitiful imagination, because I could never have imagined that in 2020 I would see the TV images below in a span of 30 minutes. 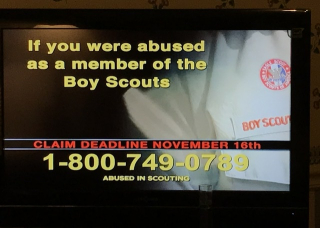 When I see this solicitation to join a class action suit for abused Boy Scouts, I picture some writer — accustomed to starting with “If you’ve been injured in an accident” — typing out “If you were abused as a Boy Scout ... “ and pausing a moment to shake his head in disbelief. Just for a moment, though, because something so monstrous is now so commonplace. 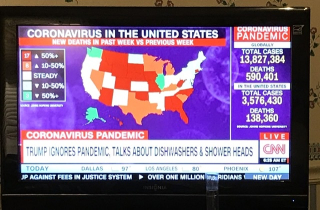 This CNN image makes me think of the video they plan to play in case of the imminent destruction of the earth. Did they have a plan for possible pandemic coverage? 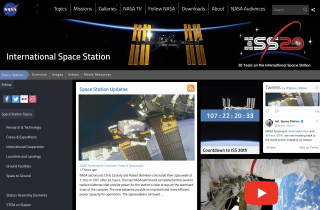 I was looking at the NASA page on my flat little computer that sits on my belly (that I also never imagined) and saw that not only is there an International Space Station like in 2001: a Space Odyssey, but it’s twenty years old.

The Thing That No One Saw Coming. 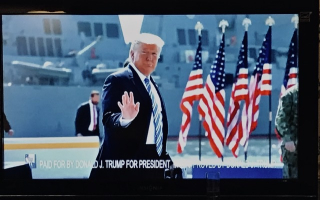 I mean seriously. Talk about the unthinkable being commonplace.

Posted at 08:12 AM in In Which We Mock Ourselves | Permalink

And, not just in the Boy Scouts. The Catholic priests, too. And,I had a friend from Malaysia who told me it was well known that the Islamic Imams abused young boys sent to them for instruction.

While I have read articles predicting a pandemic, I never pictured one so extensive in its reach.

And Trump? What the heck?

Arlene - I’m so focused on seeing per capita numbers exclusively now given the virus, I wonder what the rate is for sexual abuse in general society, vs how common it is in religious society, or values-based organizations like the Scouts. Perhaps it’s the same rate, and we’re only scandalized seeing the moral people doing it, and maybe we should be scandalized across the board. Now I’m off to google that, which will not show well if anyone subpoenas my iPad.

I would like to know what you find out. I would bet it's common in many or most segments of society. One thing that surprised me about the me too movement was that sexual assault was so common among some of the more middle and upper-middle class women. I had always thought it was mostly confined to the so-called lower classes (or at least the less educated). It's relatively recent that we have discovered that so many boys were victims.
Testosterone can be problematic.

Arlene - after two hours I can’t even find a reported percent baseline two sources can agree on. Is is 20% or 2% in the general public? The only agreement is it is worse for girls.
There is certainly no bar graph showing per capita comparing scoutmasters to priests. All I could find was an article that said someone determined the percentage of molestation in priests was no higher than the general public:
https://www.newsweek.com/priests-commit-no-more-abuse-other-males-70625

I suppose the priests just get more attention--more public outrage. Although, 2% in general public seems too low.

It's interesting to me that the Republicans use the safety of children (feeding them, limiting their physical/sexual abuse) to argue for school openings. I hope things aren't really that bad.

Arlene - 2% seemed crazy to me - but then again, it’s reported cases. It would be almost impossible to incriminate ones father, I think.