So, sometime last week I said I was going to try to up my guitar skills by training  my ear and perhaps learning some music theory basics, like why you never have an F sharp and a B flat in the same song.

Somewhere buried in YouTube videos about megahertz and chord roots I saw an advertisement for this wonderful “long-lost technique” for learning music called the Kodály method.

You know what the Kodály method is? It’s this: 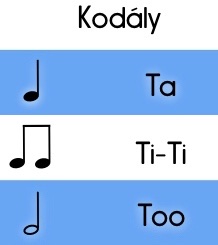 This stunned me, because Wikipedia says that this method - all this ta - ta - ti / do - re - mi business - came about in the mid fifties. I can attest it was entrenched in the late sixties: I have a distinct memory of a music teacher giving me the Sol sign at shoulder height and saying “ti - ti- taa!” And clapping, lots of clapping.

What I find amazing is:

And, it’s no wonder that when I began reading music I asked, “What note is ‘Do?’” Evidently I learned “Moveable Do.” It’s “Fixed Do” that would answer that question, and I believe the answer would be C.

I am skeptical that this method is out of favor. How else could you ever know what notes were?

Posted at 08:06 AM in In Which We Mock Ourselves | Permalink

Yeaaaah. I learned music by "these are the names of the notes" and it worked fine?

KC - so, if someone says sing an A you know what an A sounds like? Cool.

No, more pointing to the notes on a piano: this key is a C, not a Do. Singing isn't something I officially learned at any point (I mean, there were some How To Sing Better general notes/rules in choir, but it was neither formal nor chronological) and with singing, while I can follow music if I know where the first note starts, as long as it doesn't hop too much, I can't just look at the first note of something I've never heard and go "Oh, that's..." [sings correct note]. I bet if I'd been paying attention I could, since there would be things I know that *also* use that note, but... no, did not pay enough attention, all is lost, etc.

(also pitch pipes are magic. It's hard for choirs not used to singing acapella to sing acapella with *absolutely no* unifying starting note to go from.)

KC - they say only 1% of people have perfect pitch, so pitch pipes are necessary.

That makes sense. One of the choirs I was in had a couple of acapella songs that were "started" by a soloist - a couple of words, then the choir joins - and now I wonder whether those soloists had naturally perfect pitch, or had trained hard on those specific notes, or whether we were all just singing slightly sharp/flat of perfect pitch sometimes depending on where they started us!

(that said: choir director always had a pitch pipe in his pocket, just in case! And he was fine with using it to start us when, say, the entire sound system lost power such that we had to sing a full concert acapella. Oy.)

KC - I was in an a cappella chorus. The tallest person in the back row had the pitch pipe if I remember.

That'd make sense! Did multiple people come packing pitch pipes in case the very-tallest person was sick on any given occasion?

KC - it occurs to me we only performed three times. In rehearsal there was always a piano. And in case you think it was a fun a cappella group like in Pitch Perfect, it was a fancy group full of serious music majors. (I had no business being there.) I only remember the Phillip Glass atonal thing and the fun gospel Easter piece.