UPDATED: For Every Bear You See There are Ten Bears You Don’t See 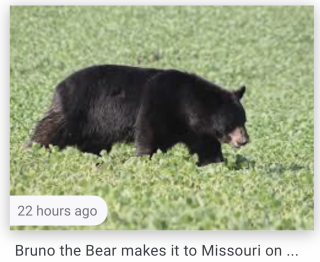 Evidently a black bear is on his way to my house. They say he’s looking for love with a female black bear, but no bear in Wisconsin or Illinois suited him. Now he’s trundled his way through several states and been spotted in Hannibal, Missouri, and if he continues his southern path he is welcome to eat some peanuts in our backyard. Perhaps he might hook up at Ladies’ Night at the S_____ Peanut Buffet.

They have given him the name Bruno. Evidently Bruno is the default name for lovelorn bears; there was a more dangerous Bruno the brown bear in Europe at one time.

Our Bruno is a harmless, peaceable black bear. However, wildlife experts all agree, “Don’t approach the bear.” No one says, “Tickle his belly, feed him by hand, he likes that.” 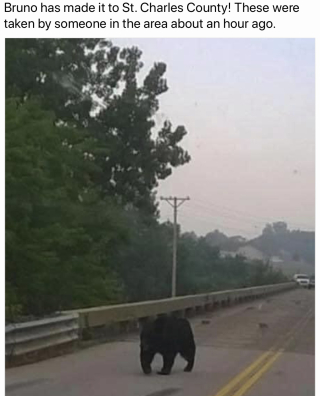 Okay, he really seems to be headed straight for us. I mean - I have driven on Interstate 79, the road he is on. It leads directly to our house. He’s about thirty miles away.

[then a few hours after that] BREAKING NEWS: 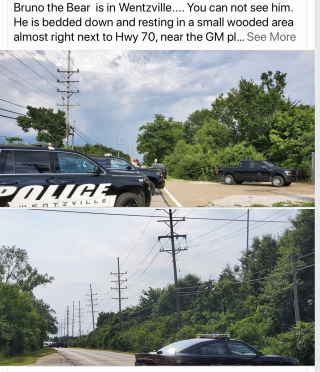 Bruno, Bruno, you’re our bear / Have some peanuts / Please don’t eat us.

[Updated the next morning]

The Internet claims that Bruno, after his long journey south, was intercepted by people from the wildlife department and from the Saint Louis Zoo. Supposedly he was rehydrated, sedated, and relocated to a large lake near Hannibal, which, yes, is back up north where he was at the beginning of this post.

I am suspicious. This makes no sense. If the bear is looking for love (or as one local paper tweets, Bruno the Bear is DTF), are there willing female black bears at Mark Twain Lake? If not, won’t Bruno just wake up and say, “Damnit, I was just here. I walked in a circle.” Wouldn’t it make far more sense to truck him south of Saint Louis so he just jumps over the dangers of the city?

[minutes later, after consulting a map]

Aaahhh ... wait. I bet he’s being shipped south to Mark Twain National Forest, not back north to Mark Twain Lake. (We’re a little proud of Mark Twain.) That’s better. The Forest has a lot more going for it, including recent reports of other black bears, plus the largest nearby city is a college town.

Still, if any Wisconsin bears pledged money for the Bruno walk-a-thon they might argue he cheated.

Here’s the official story. It does not mention “Mark Twain” anything, but “Mark Twain”  was referenced enough last night that I’m pretty sure he was taken to Mark Twain National Forest. It will be interesting to see what he does next. What if he backtracks and turns up on the doorstep of the Saint Louis Zoo, DTF?

Posted at 12:09 AM in Miscellaneous Mockery | Permalink

Have they explored the possibility that the bear had cabin fever from quarantine and wanted to do some socially-distanced travel and skip a bunch of Zoom meetings?

KC - brilliant! I’m ready to go on a 400 mile walk myself.
What bothers me is that they are reporting Bruno’s Journey is at an end. You can’t cage Bruno. If he really is in the state park, he can walk right out and keep heading south.

KC - THAT is my fervent wish.

I wonder what ICE would do about a bear roaming through their No Man's Land territory?

KC - perhaps the international student issue will be punted to the states, so the admin can posture as strong but states will do the right thing. Or, the bear option, that would work too.

As far as I understand, it can't be punted to the states, because it's a visa issue and ICE is the one who issues/cancels visas and goes and hauls off students. (like, literally: white van with no windows, detainment facility that's worse than prison; a friend went through it when he believed the office that told him on the phone that of course he didn't have to leave the country because it was that office's fault that his green card had gotten delayed such that his visa would expire before the green card was finalized.)(so I also have zero expectation that they'll leave international students alone, which I otherwise would have had; this was even the previous federal administration, and I assume it's even worse now.)

But I'd love to be wrong in some way that results in the system actually *working properly* and fewer people dying and whatnot.

KC - oh, that sounds awful about your friend!

Yeah, it was REALLY bad. They didn't even schedule a bail hearing until a local newspaper picked up the case and published it - our friend was just... stuck. But eventually: bail hearing, then trial with release, and longer-eventually green card. But, like, lasting trauma and also we all had a massive realization that no, "the system" is not working mostly-correctly, and no, it is not "in good faith" - it is for the numbers and they don't care what the human cost is for getting their numbers up for more funding, etc.

KC - the only person I know who seemed to be treated well by immigration was a former British priest who lived here without citizenship until Bush was elected and then he took his test and got a perfect score. I mean, I think that is ICE’s dream immigrant.

Lots of people do have things "work" more or less correctly with student visas and green cards (although I have heard that the green card process for people who are married is... aggressive, in terms of trying to catch you out in some sort of evidence that it's only a marriage of convenience). So there is that; I know more people who have had things be at least basically okay (if obnoxious and heavy on the paperwork and chasing things and runarounds and looking up bizarre proofs of specific information and stuff), than people who have had Really Serious Problems.

But when ICE screws up, it's not ICE who suffers for it. And when ICE makes decisions like this, likewise. Or smashes caches of water along the southern border, or...

KC - it’s all so opposed to the melting pot ideal I was taught in grade school and high school.

Honestly, I don't think there's ever been a time when the Statue of Liberty poem has *actually* been something the political/social leaders want to do. However, grade school tries to paint things in very attractive colors, possibly because "people mostly stop sharing with people they don't especially like, once they get out of kindergarten" is a bad way to teach sharing?

(The whole "we value human life! except immigrants!" thing also pisses me off, as does the "therefore they are animals" rhetoric. Hello, folks, check out where your own family tree had desperate immigrants in it!)

KC - I was surprised one of the two times I babysat for churchgoers. The mother called to see how things were and I mentioned her daughter and friend were fighting because the daughter wouldn’t share her toys. “Why should she share?” the mother asked, offended. “They're HER toys.” So, evidently sharing isn’t a virtue everyone agrees on.

UH. Wow. My church experiences may not be exactly typical (I have suspected this for a while, because I am, uh, not part of a Voting Block), but church=sharing. ALL THE SHARING.

(I do think it's okay for kids to not share "comfort" toys, and okay for kids to have some autonomy over the disposition of their "special" toys as well - fragile ones or the one totally-new one [although in that case, if there are other kids around who want to play with those toys, then you put those toys away in a safe place and do not keep playing with them in front of them][kids usually don't want to play with other kids' comfort toys?]. But in general: y'all share. This is how it works.)