I actually liked the fake crowd noise. I noticed one long fly ball that almost made it into the seats, and the “crowd” made the appropriate ascending and descending “AhhhAHHHHHHHROOOAAARRRawwwwwwww...sigh” sound. I pictured some sound guy twisting a dial as the ball almost made a home run and then didn’t.

What I didn’t like was the absence of the Clydesdales. Though it seems there is just the one team, there are many many Clydesdales, even alternate Clydesdale when an original Clydesdale is unable to perform his duties. So I know there are at least ten bored Clydesdales tapping their giant hooves and wondering why they aren’t being photographed. I would accept a socially distant Clydesdale, or a Clydesdale masked with a feedbag.

I also felt it was nice that they kept Fredbird on the payroll, but couldn’t they have had him kick back instead, hang out in the dugout, put his feet up? They had him retrieving foul balls. He looked sad. 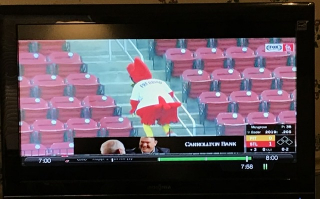 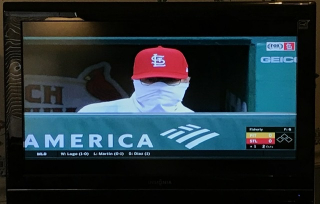 I have a neck gaiter with a raccoon printed on it. How did no one think to print some of these up with a Cardinal beak?

Posted at 08:49 AM in Miscellaneous Mockery | Permalink