Band of Brothers Vs The Pallisers

Gary reads this many books at one time: 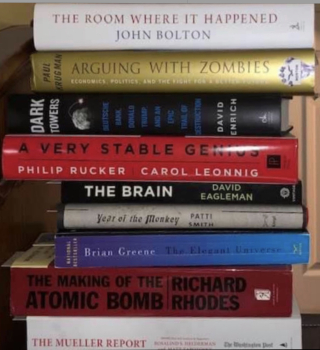 Given that, I don’t know why it troubles me so much that I am binge-watching two shows at once. The two shows are as different as you can imagine: The Pallisers (50% romance and 50% political intrigue) and Band of Brothers (15% relationships and 85% battle scenes).

I’m not all-in on either of them. I may switch to reading the Pallisers books instead, especially given that I have Mom’s copies and there’s a good chance that they will be annotated.

I was reminded lately that Mom and I watched A Tree Grows in Brooklyn, and even though we’d read the book we sobbed like teenagers at the end. That’s added to the list of things to watch. Or, books to read. (Currently I’m in the middle of reading Devil in the White City, and as you can imagine, I’m not happy with the proportions of Architecture and Murder. Less architecture! More Murrrrrderrrrr!)

I think I would like Band of Brothers far better if they condensed each battle scene to a few shots. “I have no ammo!” “Who’s this new fella Fitz?” then: Bang! Whiz! followed by “Where’s Fitz?” “Fitz didn’t make it.”

I know it’s a true story, and that the men at the beginning are probably the older versions of the actual soldiers, and usually the documentary aspect would clinch it for me, but I just can’t abide taking up so much time with the Bullets flying and the plot at a standstill. I’m only on episode 4, though. Perhaps there’s more dialog and plot progression in later episodes.

Posted at 08:42 AM in In Which We Mock Ourselves | Permalink

Wow, Devil in the White City. Is that disturbing or what? I read it about two years ago and it sticks with you. It’s odd how, because of black and white photographs of the time, the world seems almost like it’s all just stories. (Not horrible, horrible, reality.) Very well written but somehow you don’t think of people like that existing then. (Again, I think the B&W photography gives it an unteal feel.) Curios to hear your final thoughts.

Lisa - I am only about half-done with Devil in the White City. The writing is lovely. I always love it when I have to look up a word. There was some term for strong desert wind. Also, I am very concerned about sickly architect Olmsted. Don’t tell me what happens to him. I expect him to die every minute.

Re The Pallisers--Anthony Trollope at his best. Several years ago, I became thoroughly addicted to Trollope. I think I've read all of his novels--some better than others. The Palliser novels were my favorites. Not just romance, but they also give one some insight to the British culture and how it changed through the years to be something more familiar to Americans. One example: marrying for money was common, now more common to marry for love. (Well, for most of us.)

Trollope also has a lot of politics in his novels--strife with the Irish, the Corn Laws, etc. Trollope, himself, ran for parliament--didn't win.

Love Trollope--Thanks for reminding me of him.

Arlene - thank you! You inspired me to actually hunt for Mom’s copies of the Trollope books, and CanYou Forgive Her is annotated in at least one place. If I remember I liked the Eustace Diamonds best. Mom is missing Phineas Redux, somehow. I need to go online and rectify that.

Phineas Redux is good. But, read Phineas Finn first. If you have a Kindle, I bet Amazon has them free or very cheap.

Some of the characters in Trollope's political novels are based on real life politicians of the era which must have made them particularly interesting to his contemporaries. Did you know there are Trollope Societies both in England and USA? Unfortunately for me, no chapters in Omaha.

Arlene - Phineas Redux was the only one mom didn’t have, and I just bought one on-line to match the rest of her series of books. I have to get through Can You Forgive Her before Phineas Redux.

Lisa - at the end, it made me wonder how many uncaught serial killers there were out there. There seems to be a huge gap in time between Locusta the poisoner and Jack the Ripper / H. H. Holmes.