« Blood Drive (thru) | Main | Another Step Further In The Drug Transition »

I woke up this morning to this chaos on the sidewalk to the front porch. Lirope leaves and mulch were strewn across the sidewalk and pulled into a right-hand corner where nothing grows. 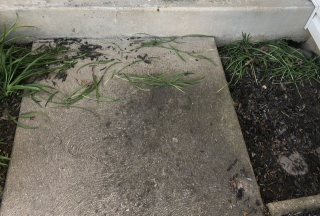 At first I blamed the deer. “Damn deer,” I said, “Last season they ate all the Ajuga and licked the shrubs to death. Now they’re after the Lirope.”

Then I wondered why some of the Lirope debris was on the right side of the sidewalk. I remembered that I had blocked off the rabbit warren there.

Here's how it looked last week when I blocked it off. 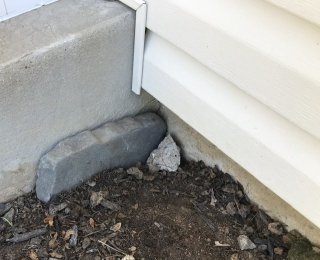 All sealed up, no Lirope leaves.

Here’s how it looked this morning: 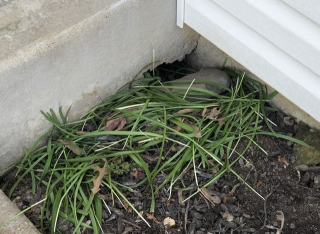 So, evidently the chunky rabbit did not like having his front door blocked, and decided to knock the block down and repay vandalism with vandalism.

Overnight, he grumbled, “These humans have infested my home. Pests. A nuisance.” He then checked Rabbit Wikipedia for “how to rid your home of humans.”

“I see. I need to destroy their nest. Well let’s wipe out the landscaping they built.”

Then he chewed off half a Lirope ... 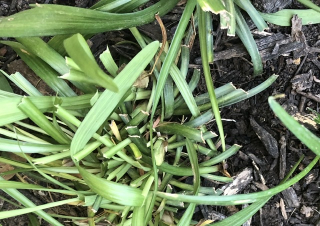 ... and dragged it across the sidewalk to cover the offending rock. (Obvious homage to The Godfather and the horse head.)

I complained to Gary, who OF COURSE TOOK THE RABBIT’S SIDE. He even said, “We are living in their field, you know. They have a right to be here.” 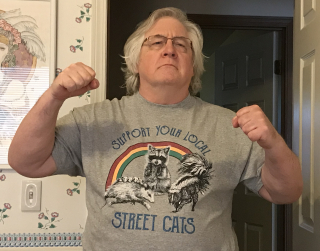 Two against one. I had no choice but to remove the rock and stuff some extra Lirope in the hole as an acknowledgement of who is in charge.

Posted at 08:20 AM in In Which We Mock Our Husband | Permalink

Have your local rabbits been reading Watership Down?

I personally wouldn't really want to block up the hole in case you then end up with dead rabbits under the house, but I would generally tilt towards not encouraging them to live there rent-free (although maybe rabbits do not carry any pestilences? do they host ticks?). Maybe the answer is ferrets? I don't know...

KC - I myself have never read Watership Down, though it is one of Gary’s favorite books. And they have two other ways out in the side yard.

If they've got other exits, then it's just a matter of how committed (or not) you are to blocking off this specific one. (well, that and how much you want to humor the Clearly Feverish One [Fiver? is that you?]).

Watership Down is a fascinating book. Does he like it for its political/sociological satire, or the cute fuzzy bunnies, or the Hero Winning Against Odds, or the descriptions of the countryside, or something else?

KC - knowing him, it’s the satire. I bet he has forgotten it entirely, though. He has nine books on his nightstand, otherwise I would suggest that he read it again.

Some people read it as kids and have everything except "rabbit adventure story" go over their heads and then read it again as adults go "WAIT! The militant warren of rabbits is fascism!!!" and have their minds blown. :-) I failed to read it as a kid, since I assumed it was a shipwreck book, and thus first read it in my early 20s or so and at that point was like "wait. People suggest *kids* read this?" But they do! And they read straight over some of the more appalling things in it because of how the language is couched (a bit like with the Little House on the Prairie books; as a kid, I totally missed how many times they almost died and also missed the ongoing tug-of-war between Ma and Pa; as an adult, uh, wow, but yes, it's written in such a way that it is *possible* to miss that the prairie fire would have killed them all, etc.).

KC - but we know how to make candy out of maple syrup and snow and that pig tails are tasty.

(I do not want to play ball with an inflated pig bladder, however.)