Early in the pandemic, on the day I tallied up all our available food, I sent Gary out for yeast packets. He came back with this Huge Bottle O’ Yeast: 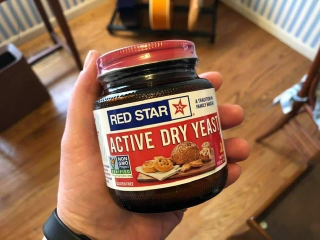 It stayed on the shelf. The only thing I did with it was mail some in an envelope to Friend Anne, who was making sourdough because she had no yeast.

Then, eventually, four weeks into the Great Confinement, I made some bread. Such a disappointment. I made the conversion between instant and regular yeast correctly, but I added the extra quarter cup of water at the wrong time.That bread was so gummy and grey it had to be thrown away.

I’ve made yeast bread from scratch plenty of times, but this failure rocked my confidence so badly that I dug my 1990s bread machine out of the basement.

What a delight to use! I had forgotten about the clunky industrious noises it makes, and the beeps, and the smells, and how it produces a simply perfect loaf of bread. So easy! I had an egg sandwich for breakfast and I will have a peanut butter sandwich for lunch.

I may not put that machine back in the basement ever again. Of course, I will wake up bloated and achy, but I imagine Gary will chew up all the bread before I get much more of it.

Posted at 08:44 AM in Miscellaneous Mockery | Permalink

I was fortunate to have 3 packets of yeast in my refrigerator when this whole covid-19 thing began. The first was used to rescue a sourdough loaf that I had tried to make with wild yeast. I've done this successfully before, but this dough was stiff and heavy--wouldn't rise. Maybe because I put so many seeds into the dough. Or maybe the starter wasn't as ready as I had thought. The second packet is (as I write) being used to inflate King Arthur's recipe for cinnamon rolls. Too soon to tell on this one.

Will consider carefully before using my last packet of yeast. I think you're quite lucky to have a whole jar.
Arlene

Arlene: You can start a sourdough-style starter with regular yeast! There's not as much written on it now (since we [normally] have access to pre-packaged yeast), but in Days of Old, people kept their yeast going and going, and only went to the store for a "fresh cake of yeast" when something went wrong (or when there was hot gossip and they wanted to go to the store to swap it). Personally, if I were in your position, I'd use 3/4 of the yeast package on a normal raising bread/pizza-crust recipe [not high in sugar or fat, though] and just increase the rise times (maybe adding an extra rise-and-punch-down cycle if the first rise moves noticeably more slowly than usual for your kitchen temp), and then use 1/4 of the yeast package to start a "sourdough"-ish starter.

Arlene - I always blame baking powder. I buy the smallest container of that but it always expires on me.
KC - that sounds like magic to me. I thought I was smart to cut back in the better when I used cream instead of milk in some muffins I made

You totally were smart to cut back on butter when using cream instead of milk! :-)

I've done a... lot... of improv baking; I have also done a lot of reading books and cookbooks from the Days Before Packet Yeast. :-) So magic is really just having read a bunch and having personally messed with things a bunch. :-)

But really, a lot of yeast-rising recipes are tolerant of you multiplying the yeast *in* the dough instead of adding it at the beginning - the recipe just needs to not have too much of anything that reduces the growth/multiplication of yeast, including garlic and fat, or too much of something that complicates it like sugar - yeast can get a "sugar crash" for reasons I frankly do not understand and have never learned to work around. But in a recipe that's neither brioche-y or garlic-y and that doesn't have more than a tablespoon or two of added sugar, you can cut the yeast quantity, keep letting the dough rise and punching it down until it's rising as fast as it "ought" to, then bake it! It's pretty straightforward to do if very precisely if you have a solid sense of how that dough "should" rise in your specific temperature, but otherwise I'd just chuck an extra rise in there if you cut the yeast quantity by 1/4, and call it a day.

(adding rising cycles also works for yeast that is not dead, but... a bit old and tired. *But* you have to know what normal is, in order to repeat until the dough is behaving as normal, which is a handicap with new recipes, and you also need to be relaxed about when exactly you bake it, since still-barely-alive yeast might result in a dough that needs 10 hours of rising instead of 2 (although you can usually chuck the bowl in the fridge overnight when you want to stop monitoring it and go to bed; it'll still rise in the fridge, but the cool temperatures slow it down enough that a sluggish dough won't overflow overnight).)

It's really fun stuff! But you do have to go by how-is-the-dough-doing rather than what-does-the-recipe-say (which, honestly, you should be already doing if you're doing yeast dough outside a breadmaker, since kitchen temps affect rising times enormously), and I can understand people getting nervous about that! :-)

KC - it sounds like you are an expert. Have you read the Paul Hollywood bread book?

I have not read it! Is it good? I sort of... stopped reading new cookbooks about a decade ago. There are recent-ish cookbooks I want to read, in theory; I just haven't actually gotten my hands on them and read them... (I'm determined to read Salt, Fat, Acid, Heat by Samin Nosrat, though.)

KC - I bough salt fat acid heat for Gary. Neither of us have read it. I did make an excellent spatchcocked chicken from it though.