Well, I haven’t sewn any masks for the doctors and nurses. I’d hate to think the only thing between a doctor and a virus was my sewing skill. Now that the only life that would be lost is mine, I’m starting to think creatively.

So, how do I make a mask out of the supplies I already have in the house? I can’t expect a doctor to sport a ninja mask made out of my husband’s underwear, but I can do it myself. Sadly, when I tried the ninja mask shown in that link, I found that either my head is too small or Gary’s thighs are too big, or both.

So then, I was thinking underwear, and I thought of tightie-whiteys. They have that cunning flap in front that could hold a coffee filter for extra protection.

I could cut on the dotted lines and remove the extra fabric in the back. 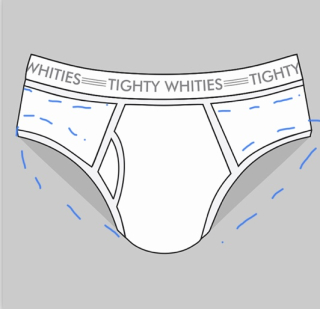 The waistband would go over my nose, then the leg bands would be pulled back behind my ears, then my mouth would be in the crotch, as you do, with the added protection of a coffee filter tucked in to the cunning little crotch pocket.

Or maybe that would work better flipped upside down. Hm.

Or I could make this out of papier-mâché: Ohh! I already have the goggles from my onion-cutting supplies.

I also have heavy black landscaping “cloth” that seems like it might be useful, and really, anything with elastic can be stripped for its elastic parts.

There is also a respirator mask that Gary bought when he thought he’d be spraying our house for bugs. Gary said it wouldn’t work, but I don’t understand. It looks like a WWI Mustard gas mask. Perhaps I could stretch a sock over the air holes. Seems like I’ll end up making something out of duct tape and landscaping cloth.

Posted at 08:39 AM in In Which We Mock Ourselves | Permalink