Back in the day, nine years ago, we went to the Kentucky Derby. For a few months I prepared for the derby by making an ornate hat. 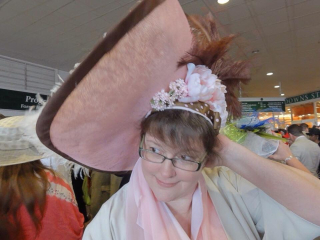 At the derby among lesser hats

It only took a few months make the hat. It was well received at the Derby, and in fact, so well received that it earned the name Celebrity Hat. (If you want to read the genesis and the glory day of the hat, read from this post to this one, ignoring any non-hat details in between.)

Celebrity Hat faded into obscurity, no doubt because she did not go on Dancing With the Stars as Becs suggested. Instead, she made a few trips to work functions, and gained enough of a standing that someone asked to borrow her for a charity event about five years ago.

I took a critical look at CH before whoring her out, and I did not like what I saw. Fine from the front, but chaos in the back. I ended up flipping her backward and adding some nice chunky peonies. Then, when she returned, it was back to the basement for her.

This year, Friend #2 had a charity event, and had that white feather looked more curly than crunched she would have looked perfect. No one who borrows the hat has a pea-head like mine, so this time I got the stapler and augmented the Velcro and now Celebrity Hat has two settings: Pea and Normal. 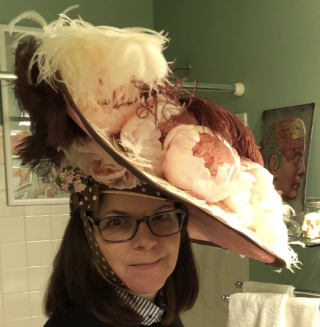 Friend #2 has now reported that CH had a fine time and was again greeted by the same words she heard at the Derby: “Now that is a hat.”

This time CH will have a job while in storage. I used Saran Wrap to shape that white feather around a Nerf Ball, so she will emerge perfectly curly and glorious the next time she makes a comeback.

Posted at 08:57 AM in Miscellaneous Mockery | Permalink

That hat is a hoot. Good work on figuring out how to make the hat self-repair during storage!

KC - I thank you, and Celebrity Hat thanks you.

That certainly IS a hat. Very Eliza Doolittle At The Races. Come on, Dover!

Lynn - thank you. I am almost as proud of Celebrity Hat as she is of herself.