When we saw Rigoletto this past summer, we noticed the main character hauls around a ventriloquist’s dummy. I asked Friend Anne if the dummy was standard and she said no. I felt the dummy was distracting and creepy. Also, it didn’t sing. The reviewer for the Post wasn’t a big fan either.

Then I watched the recent PBS broadcast of Madama Butterfly. (Evidently when she’s at the Met, she’s Madama, when she’s in Saint Louis she’s Madame.)

[Spoiler] Do you plan to see Madama Butterfly (or Madame, depending on your proximity to the coast, la-LAH)? Then stop reading right now, because there’s a key plot point coming.

At one point she brings out her child and it’s a freaky Mummenschanz puppet. See the dark veiled puppeteers? 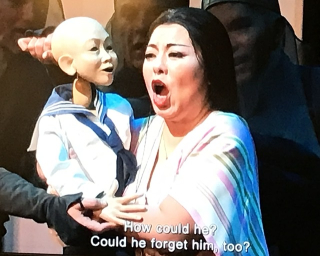 The reason there’s a puppeteer’s hand behind Pinocchio’s head there is because that’s where the handle is they use to tilt his head, because he wasn’t creepy enough already.

I wondered, why not have a live human child play that part? There’s no singing involved. Couldn’t a toddler be counted on to be led around by the hand and then pretend to sleep at one point? Just fall asleep and then wave a flag at the end.

So evidently using creepy articulated wood dolls to fill minor roles is a thing they do at operas now. I know I haven’t seen a lot of operas but I do not approve.

Posted at 08:25 AM in Miscellaneous Mockery | Permalink