Last week I read that there was a Snow moon coming up. That article was illustrated by images like this: 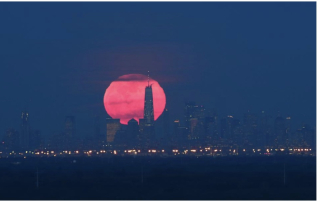 There are even more phenomenal images in this article from a few years back.

I have never in my life seen a moon look like that. I have seen references to the moon illusion, and I know it’s a phenomenon, but I have never seen it. I set out to see it.

I did my research, I did everything they suggested. I found a high point with a view of the horizon. I waited until the appropriate minute. I kept waiting. Five minutes later I saw a normal sized faint full moon about five degrees above the horizon. Well, not normal, it was a ten percent larger than a normal moon. A dinner plate moon. I deliberately looked at it with things in the foreground, since I read that helped with the illusion. The moon filled up one of the arches on a McDonalds sign three blocks over. It didn’t look like it was going to swallow the Taj Mahal.

It’s just like when you’re the only one who can’t see the dolphin in the Magic Eye painting. Do you all see the moon illusion when you look at the moon on the horizon?

Posted at 08:02 AM in In Which We Mock Ourselves | Permalink

Do NOT get me started on those magic eye things. I am convinced they are a mass conspiracy of people working to make me look like an idiot. I do not need additional help looking like an idiot, PEOPLE.

Lynn - I am with you. I just say “porpoise” immediately. I don’t even try anymore.