This week, the vases went from this: 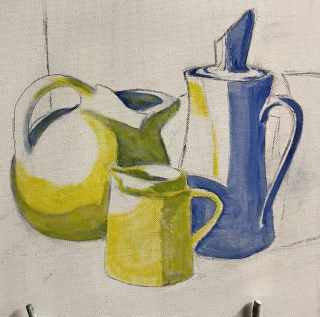 I really need to soften those sharp angles that showed up in the fronts of the two right vases.

After adding the yellow, which took five minutes, I switched to another canvas and tried to do something opaque of the same subject. It was so, so bad that it is in the trash. It is beige-shadow-on-top-of-a-black-background bad. So bad I don’t know why I am telling you about it. Isn’t that just unspeakable? It’s crazy. Crazy-pink-cast-shadow-on-black-background crazy. Irredeemable. All I can think is that I am subconsciously purging all my mistakes in the opaque version.

So, that was a peek at the 25% of my painting that is truly awful.

Posted at 08:24 AM in Miscellaneous Mockery | Permalink

I wish I could do as well as what you seem to consider your worst!