Gary heard Cats was a train-wreck, cringe-worthy, an abomination. My only guess is that the makers of Cats have publicized its flaws virally so rubberneckers like my husband want to see it out of morbid curiosity.

“I’m not spending money to see a bad movie,” I said. Yet still, he wore me down and two tickets were purchased, because I will spend money to avoid an argument.

I was influenced by this review, that characterizes the movie as bad, but so in-your-face unapologetically bad that it becomes appealing.

We agreed to nudge each other if we saw anything really bad. There was a lot of nudging.

We couldn’t get lost in the movie because some graphic artists hadn't been given enough time to perfect their work. The artist who made Ian McClellan into a cat had enough time. 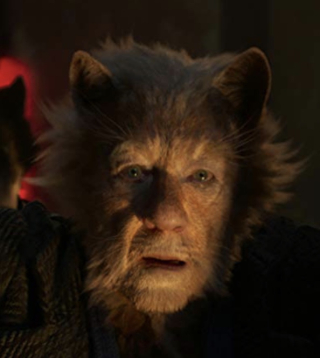 But then the main cat looks like a cat wearing a rubber human mask. So, I never truly suspended my disbelief. 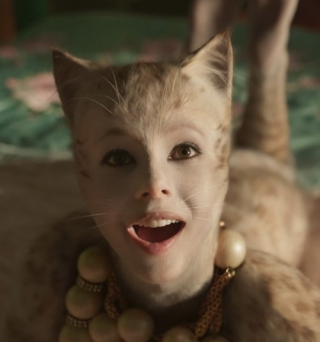 Oh hai. Do you has a flavor?

The whole thing culminates in a reprise of Memory, and of course when the music began to build my eyes began to leak, but at the same time I began to laugh. I laughed at two things: first, it was sung by a CAT with a FACE and second, said cat chewed that scenery like Meow Mix. Way over the top.

I felt a little bad for having criticized the young man at Little Women who did not share the feelings of the rest of the audience. People around me were still sniffling when the same CAT flies off in a HOT AIR BALLOON (spoilers). I just clamped my hand over my mouth so no one could tell I was simultaneously laughing and crying. I hope it looked like I was just quietly sobbing.

Afterward I did my usual post-movie research. The musical was a second draft of a song-writing exercise based partly on first drafts of unpublished poems (so I suppose it’s right that the movie was still in draft form when it got to the theaters). I wondered why Judi Dench allowed herself to be filmed in a cat costume and then read the history of the stage musical and found she had been slated to be Grisabella until she had an injury.

Elbow-nudging now forgotten, Gary has decided he loved it, partly because he has a crush on the cat-human hybrid above.

Posted at 08:56 AM in Miscellaneous Mockery | Permalink

I appreciate your sacrifice. They stuck Cats into our Broadway Across Canada subscription with Hamilton so I guess I have to see the musical, at least. The movie I'll hate-watch with my daughter if it hits Netflix.

Allison - Friend #4 walked out of the musical. But I understand that it’s very popular.

From your Judi Dench link, it sounds like Cats sort of has a tradition of being a train wreck up until the last minute, or perhaps past it? I mean, I am a moderate T.S. Eliot fan, but that does not mean that any given set of random poems can be turned into a competent musical.

It is pretty weird, though, and that gives it some Maybe Art cred, perhaps, with some; and then it is also dancing cats, so that appeals to a crowd. I don't know. I think the musical was on PBS sometime in my childhood and I was initially fascinated (because cats! dancing! singing words!) but then the lack of a discernible plot at whatever point in the musical it was just sort of lost me...

KC - Jennifer Hudson who stars in this movie tried to argue that the search for the Jellicle cat who shall be reborn is the plot. Not very satisfying.

I dearly want to see this, for the hate watch. But I refuse to pay the money. I keep hoping a DVD will drop into my life so that I can take it to my sister + SILs weekend away in March.

Magpie - I can think of no better hate-watch movie. Perhaps if you are staying in a hotel it might be one of the hotel pay-per-view options. Well, but then you would have to pay. Some rooms have free HBO. Otherwise, I think you might need to hate-watch something else.