I was on eBay, scouting out olive pants, and I saw these. 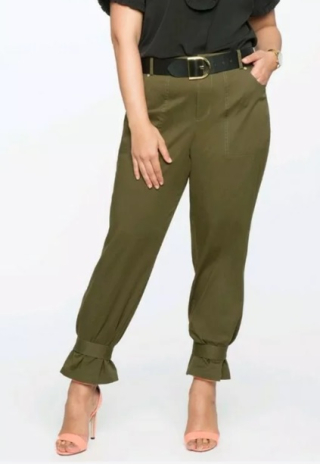 In the past I would have given these pants a wide berth, because I don’t need any horizontal lines accentuating my already-wide ankles, but then I remembered how much I enjoyed wearing my unusual linen pants this summer. So even though I can’t pair them with 4-inch peach stilettos, I bought the pants.

Once I unpacked them I discovered that photo above is as phony as an ad for soup that’s been doctored with marbles and Vaseline. The ankle button straps took an evening of running a gather stitch, fusing, and ironing to get the pants to look as they do above.

The first time I wore them, I felt they had a little Nazi vibe. Just a little, with the army green, and how they puff up above the ankles like they’re tucked in to jack boots. I was worrying about that when two ladies made a point of saying they liked my pants.

“Are you sure? They don’t look too much like Nazi pants?”

“No, just kind of military. That’s what makes them cute.”

And yes, just as the linen pants were only popular with one demographic, this pair of ladies were not white, and once again all my white friends stayed silent. Now I feel compelled to keep pushing the pants envelope.  Palazzo parachute pants? Do they make pants with a bustle? Ooo, pants with a train, like you’d see at the Grammys. I’ll keep following this experiment until all the demographics are horrified by my pants.

Posted at 08:20 AM in In Which We Mock Ourselves | Permalink

I don't even know what Nazi Pants would look like, but I'm *pretty* sure they wouldn't have ruffles at the bottom. (and augh, yes, clothing that takes major corrective actions to look anything like the posed form - not a fan. I'm more okay with soup marbles, because at least the stuff they're pushing to the top is actually in there!)

Patchwork pants? Elephant pants? There are so many different options! :-)

KC- picture them without the ruffle. They scream Nazi.