I was plugging away at TeddyJ, rolling the rock up the hill, when a company email came in offering a Special Company Event Opportunity.

I registered for it the instant I read the first sentence, not because I wanted it so much, but because it's the type of thing other people want, and you have to grab those opportunities immediately.

What was it? A chance to have my photo taken with the Stanley Cup. Not me drinking out of the cup or anything, mind you, just me and nine TeddyJ strangers photographed in the same frame as the Cup. I'm a fair weather playoffs kind of hockey fan,  not like my Dad, who bought season tickets for a decade plus before he realized they would not be winning the cup until after he died.

While I say "The" Cup, Wikipedia says:

There are actually three Stanley Cups: the original bowl of the "Dominion Hockey Challenge Cup", the authenticated "Presentation Cup", and the spelling-corrected "Permanent Cup" on display at the Hockey Hall of Fame.

The Presentation Stanley Cup has been whoring around touring the city since the St. Louis Blues Hockey team won earlier this year. It already visited Friends #2 and #4 at their new place of employment. For the first month after the big win it dropped in at random bars and drew huge crowds via Twitter and Facebook.

But, now the event is passed, the photo has been downloaded, and the secret can be revealed. Be jealous! 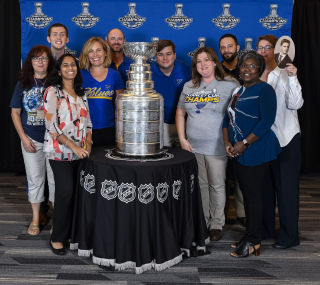 And yes, that's a photo of Dad I'm holding up. 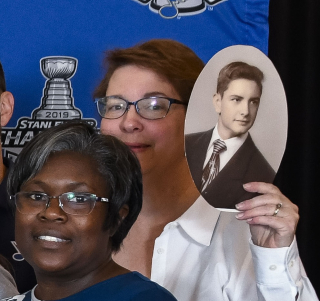 Posted at 08:59 AM in In Which We Mock Our Employers | Permalink

Excellent call on adding dad - I friggin love it!!

Jessica Fantastica - I do feel a bit sorry for the other people, who have a ghost in their photo.