Gary came home with a note someone left him.

"Yes, the hippies were right! And I also lived through that era. Just read a new book called "Poisoner in Chief" - appalling what was going on by the evil genius in the CIA."

On the back of the note was a list ("Swerve, garlic powder, price celery").

"Oh, it's just a note. Someone put it in a Baggie and stuck it on my car at the store."

"You mean a stranger?"

"Yes. It's happened before. Just throw it away."

I did throw it away, then I fished it out of the trash and took a photo. 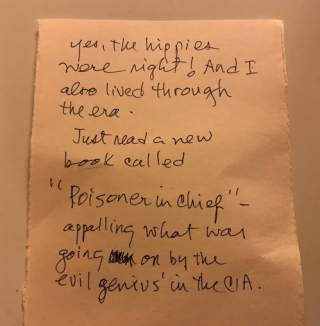 So, clearly written by a woman because men don't put circles in their exclamation points, and clearly written to Gary, because he has long white hippie hair now and was probably wearing his "Resist" t-shirt.

Of course, it's possible this woman is just a random writer out at the Florissant Dierbergs store, jotting down book reviews regarding spies and MK Ultra and slapping them on rainy car windows.

Probably a blogger, down on her luck; still needs to weigh in.

Posted at 08:26 AM in In Which We Mock Our Husband | Permalink

That is... fundamentally quite weird. I do not think I've ever had notes left on my car other than "sorry I might have scratched it!" or generic pre-printed flyers.

But yes. The note-writer maybe needs a blog. :-) Cheaper than all those ziplocs!

KC - I would think it was quite weird, only I can picture myself living in a grocery store parking lot and doing exactly the same thing.