The standoffish period lasted two hours, if you are wondering.

Unlike Mom, Jerry kept no love letters for children to discover after his death -- or if he did his mother disposed of them.

There is some other interesting correspondence, though.

There are three tiny notes in Italian on some tiny intricate notepaper involving a cellophane piece printed with  ... oh, I can't describe it. Here's a photo: 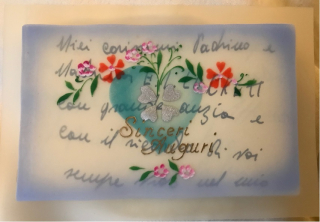 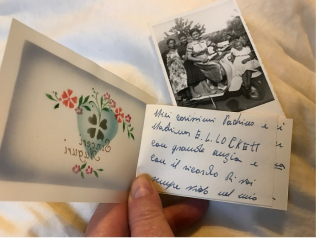 The three notes are in bad cursive so my attempts to run them through Google translate resulted in only, "Happy new year ... American friend ... our daughter ... baby chickens ... Sincerely, Caterina." The only girl in the Vespa photo that would be Jerry's age would be the one on the left. I don't know, there was a girlfriend from when he went to high school in Saudi Arabia, perhaps Caterina is the same. But for God's sake, the man was enough of a mystery to me already, now I have Italian cursive on top of it?

Posted at 08:30 AM in Miscellaneous Mockery | Permalink