Jerry had a boy and a girl with his second wife, Suzanne. As is always the way in "our" family, there are countless photos of the boy child and almost none of the girl. Then again, I suppose my half-sister Julia took her photos with her when she left, but I do wonder why she left her confirmation photos behind. Those photos made me realize how inaccurate my memories of my stepmother are. I remember her as an icy glamorous blonde, and it seems from the photos she was a very pretty perky brunette.

There are more negatives than there are prints, which means I have some time ahead of me scanning the negatives and sending them to Photoshop to invert. (And then, saying, "Who are these people?")

There is a another very interesting, three by five inch negative. It's glass, and it was in an envelope from a photo studio in Rome. 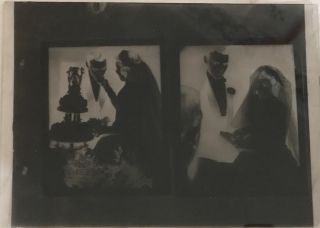 I don't need Photoshop to see that's a page from Mom and Jerry's wedding photo album. The holes on the side show plainly show that they sent the page to Rome, and then got this negative plate in return (and the page back, I believe). But why? I know they didn't have any negatives in the album. Perhaps they wanted a negative so they could blow it up? For blackmail? Why?

I was very taken aback to see my eighth-grade photo in there, especially given that I was in my twenties when David found Jerry. Gary said, "Well, obviously, your Mom sent it to him," and I laughed to think Mom would have communicated with Jerry on the sly. Regrettably, eighth grade was the worst of all of my school photos. 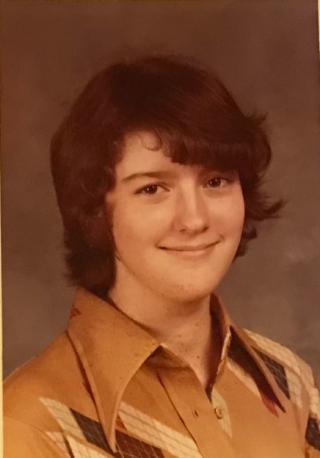 (I am sure Jerry thought, "This child looks nothing like me!")

It also has my signature on the back and a drawing I made of a "man eating bagel." (Oh! I just got that. It’s not a man eating a bagel, it’s a bagel with fangs. Subtle humor.) 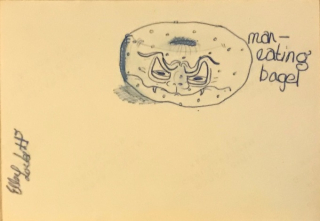 I imagine that David had that photo on hand when he encountered Jerry. He claims not to. Perhaps Mom sent it along with a snippy note? It shall remain a mystery.

Posted at 08:14 AM in Miscellaneous Mockery | Permalink