Yesterday I was lucky enough to go to the most exciting baseball game I  have ever seen live.

Exciting: It was a day game. I had to work on the weekend and start my day at 6:00, but I got to play hooky at a ball game during the day.

Exciting: The price of the parking got my heart going: forty bucks.

Exciting: I was expecting to sit in regular seats, not nosebleed, but by the foul pole, where we were the last time we lucked into division playoff seats for TeddyJ. Instead, we were in the Legends box, because the TeddyJ box was too small to hold all the people TeddyJ sent to the ball game.

Exciting: They are back to cutting the arch into the grass at the ballpark. For some reason I thought they stopped this. 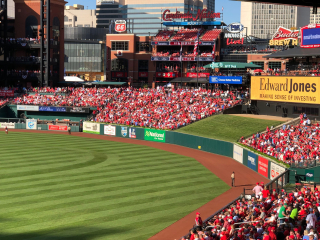 Exciting: You will be shot if you try to run on the field at a Cardinals game. 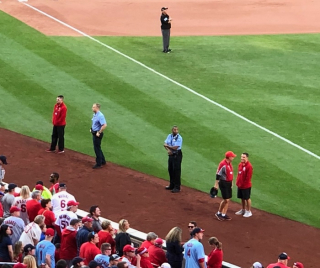 Exciting: Well, back-to-back homers, then we made errors in the fifth so the score was tied, then the crowd took it upon themselves to send psychic energy via screams to the batters. After one deafening chorus of "YADI! YADI!" Yadier Molina delivered, and then delivered again to win the game in the tenth inning.

Exciting: We ALL kept shouting "YADI! YADI!" all the way out to the parking garage. Three people high-fived me. Some man hugged Gary and me.

Exciting: Gary tried to three-point turn his way into the existing line of cars and it was such a bad idea we decided to go get dinner instead, because the parking was forty dollars and I WAS USING THAT PARKING.

Exciting: We ate at a sports bar, where the Blues game was on, and they scored a goal against the Toronto Maple Leafs. Another strange man high-fived me.

So, exciting ball game and lots of physical contact with strange men. Excellent.

Posted at 07:21 AM in Miscellaneous Mockery | Permalink