This is what happens when you are committed to taking in a daily dose of the old TV show The West Wing. Something happened on the show [SPOILERS!] that shook me to my core. 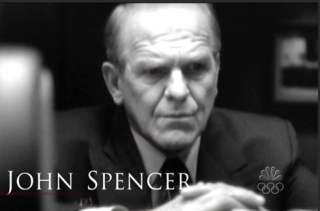 I'm not talking about the plot point in which the Leo McGarry character above, played by John Spencer, dies suddenly of a heart attack, because I did remember that from the original series. I remember it as very jarring, but the actor died suddenly from a heart attack while they were wrapping up the series.

The really shocking thing that struck me his time around was that someone remarked during the TV funeral that John Spencer's character, above, was 57.

Nope. That actor had a massive heart attack and died at 58. I thought, selfishly, as you do when confronted with mortality, "I am too young to worry about heart attacks." Simultaneously, I also thought, "Wait, people my age are expected to be White House Chief of Staff? Am I supposed to have shaped world events by now?"

Posted at 08:26 AM in In Which We Mock Ourselves | Permalink

In the last year, I've watched (binged) The West Wing twice and both times felt sad when it was over. And, Spencer's character was a favorite. Actually, most of the West Wing characters were favorites.

I also thought John Spencer looked older than his actual age, but apparently his on screen role mirrored another aspect of his real life. (I mean in addition to dying of a heart attack.) From what I've read, Spencer had had a serious problem with drugs and alcohol. I don't know how serious and long-lasting his problem was, but possibly it was enough to prematurely age him and damage his heart.

Love your 'one person's life' blog.

Arlene - I believe I read once that Aaron Sorkin, the creator, a recovering addict himself, made a point to hire fellow recovering addicts. And thank you for liking the blog. I found that waiting to post for anything of significance to happen made me post 24 times a year, so you all are getting a view of all my trivial purchases and entertainments.