Lynn at Turtlehead was writing about cursive, and I worried that I may be losing my cursive skills. Once out of grade school, I began to customize my cursive. I never went for the round, loopy cursive favored by teenage girls, but I wasn't the stickler that Mom wanted me to be. I remember the cursive uppercase F was an issue.

About ten years ago I heard of a job application form that required a sample of cursive writing, which I suppose was to weed out teenage applicants who had never learned to write in cursive. I was in part pleased to know I could get that job, and in part dismayed that people are using cursive as a literacy test reminiscent of Jim Crow laws.

So, today, I confirmed that my notes and scribbles can still be considered cursive (in preparation for the impending Age Wars in which I will be asked to write in cursive to prove I am not a spy). I wrote out all the letters, upper and lower case, and then compared them to what I remember as cursive. 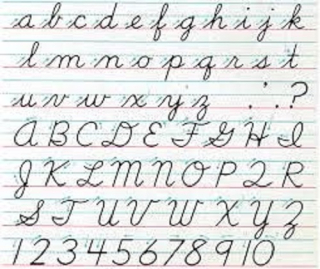 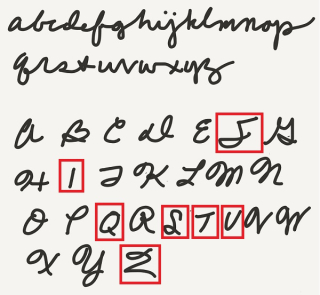 (We're just going to ignore those extra girly loops in the top left of each uppercase letter. I call that "style". Style, or "Trying way too hard" (see the uppercase X).)

I did well on the lowercase, but not so well on the upper. Clearly the F is still an issue. That backward tangent never made sense to me, so I merged it with the cross mark.

The most shameful error is of course the S, given that it's the initial of my last name. Oddly, I make a proper S when I forge Gary's signature.

I call that 86%, and that passes. Still, Mom would not be pleased.

Posted at 08:29 AM in In Which We Mock Ourselves | Permalink

Ha! Interesting. Your standard cursive is very similar to what I was taught - not at all what I expected, given that everyday American handwriting is so distinctively different from ours.
Not that I use it at all myself - I couldn’t write my notes at university fast enough and still legibly in cursive, so printed instead, which joined up by itself so in effect I invented my own handwriting.

I was amazed to read some time ago that some states have even stopped teaching cursive, which makes me wonder if at some point -sooner than later- there will be a group of people unable to read it. On the one hand, that seems silly, but if you’ve never learned it, would you recognize all the letters, especially if some of us (like me) deviate from the way we’re supposed ro write?

Lisa - my hope is that it will be like the historical documents, like those where the letter S has a tail that drops below the baseline, like a lowercase J. I could read those with a little effort. I just checked to see if I could read something older, like the Magna Carta, and I couldn't, but it turns out that was written in Latin.

Yours is scribblier and more jagged than ours, I think, and identifiably American. I'm not sure how rigidly it's taught in schools any more though, and since typing and texting are so important these days, perhaps it'll be a dying art anyway.