My Labor Day week-long work vacation has been just miserable. We knocked ourselves out at the zoo and Gary immediately came down with an earache. Of course, this meant I either spend the majority of my vacation indoors with a sick husband or outdoors alone, and I think we all know that isn't really much of a quandry.

On Thursday I was outdoors alone, on a walk in a nearby park. Suddenly I heard war planes overhead.

I haven't heard war planes overhead since they took off from our state's air force base during the Gulf War, so that was a little alarming. Then, I looked up and actually saw war planes. 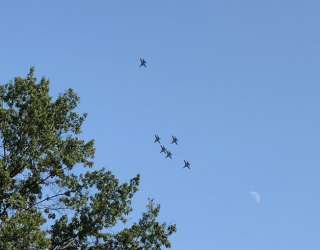 Thankfully they were flying in enough of a formation that I remembered that one of the things I had wanted to do with Gary pre-earache was to see the airshow on Saturday or Sunday. The Blue Angels would be there, and the Royal Air Force Red Arrows, (I did some CIA-level zoom-in analysis on one of my photos and these planes appear to have two jutting thingees in the rear (sorry for the jargon) and that makes them the Blue Angels.)

However, this wasn't Saturday or Sunday, this was Thursday. I never thought about it before, but if you were flying a dangerous expensive plane I suppose you'd want to do a dress rehearsal, and that must be what I saw. Even though they would disappear behind trees, I caught enough to feel as if I had my own private surprise airshow.

I see this as an homage to the St.Louis Arch. 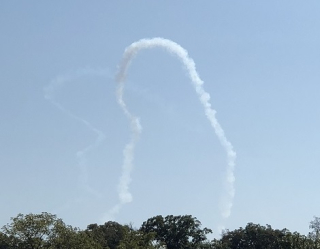 You can see this formation from far away: 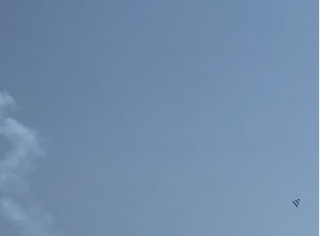 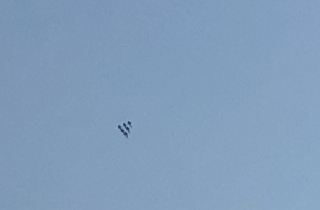 I got pretty good at hitting the sweet spot between watching the planes and taking photos of the planes. I spent a good amount of time waiting for the planes as well, because of course I was five miles away as the crow flies from the airfield where they were to perform. Generally, I waited for the noise, and when it came I held my phone in the air in that direction. 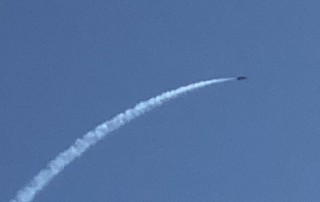 I can tell you that a surprise free airshow is a nice way to spend a Thursday afternoon alone.

UPDATE; (Days later, on Sunday afternoon) You know what’s better? Finding out that your neighborhood is even closer to the official airshow. I went out for a walk around the neighborhood, heard the shrieking engines, stopped walking, and watched a good part of the airshow again. At the end of my second lap around my neighborhood there they were, heading for home, not two hundred yards over my head, following my street as if they were coming in for a landing. I could see all the pointy parts sticking out of their wings (pointy wing parts further identifying them as Blue Angels). I waved frantically, of course. Blue Angels, if you are reading this, I am the one in the green t-shirt waving at you from north of the Missouri River.

Posted at 08:37 AM in Miscellaneous Mockery | Permalink