So back at the end of April, I gave up on my oil painting of Gary in Bath at this stage: 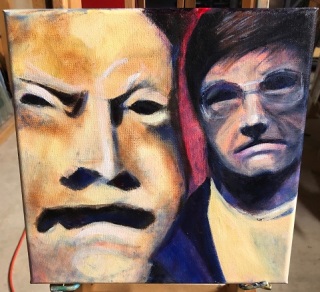 Since then, I have a) decided the previous one was a "study" and b) decided I'm painting, not drawing, and that God invented carbon paper for a reason.

So, after I repositioned some things I traced Gary's face on the canvas. I got this far on my second attempt: 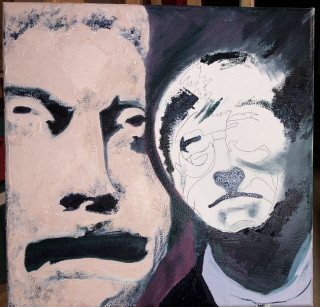 For the stone face I used the palette knife (embiggen to see), because God knows I wouldn't want to focus on reinforcing the skills I have.

I haven't touched it for two weeks. I suspect that's because I'm at the point where I don't hate it, so it can only get worse. Of course, now that I look at it, the right side of the stone face is too dark and small, somehow, and even though I traced it, the mouth on the stone face is skewed down on the left side.

I’m also working on this painting I did based on Friend #2's photograph on the left below. I hated this last week, but now it has grown on me.

Posted at 08:39 AM in In Which We Mock Ourselves | Permalink

That second one is *definitely* one of those "the person who made it can see the flaws, but from here it looks *really* good" things.

As for the palette knife, that came out really nicely! I figure as long as I'm only doing *one* new thing per endeavor, then that's fine, right? (but technically you are correct and it is good to practice and reinforce already-learned skills, yeah, yeah, yeah...)

KC - in the bottom right there is a light green frond, and I didn't make the leaves on the left side of that front be a slightly darker green, plus the big blur in the upper left needs more yellow.