About a million years and 51 million dollars ago, one businessman pushed for Forest Park and the Delmar Loop district to be connected by an old-school Saint Louis trolley, as in "Clang, clang, clang went the" etc. 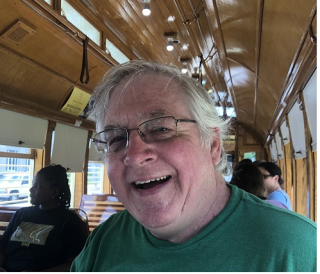 We rode it on Saturday, when our expedition to see the new museum under the Arch was waylaid when we realized half a million other people were at the Arch grounds for the Fair.

I was excited to think I might be on the same trolley my fifteen-year-old Mom might have used to chat up boys. Mom and her friend Carleen would ride the trolley from one end to the other and practice the art of conversation. She said the boys who came in on the Forest Park Stop were the best, especially the ones who had been visiting the art museum. Sadly, though, it seems these are some imported Australian trolleys. They are lovely, if not original.

The tracks are not original, either. There are original tracks in other parts of the city, but the ground had to be dug up for these.

So, people in the Delmar Loop area and the Forest Park area had to suffer through streets being torn up, tracks laid, electric wires hung, cement poured, cement not being walked on for a month, hosing down the cement every day, and on top of that they were being taxed for ten years on top of that.

They. Hate. The. Trolley.

I felt bad for the trolley. I am certain no one treats trolleys this way in Australia.

Posted at 08:20 AM in Miscellaneous Mockery | Permalink

Yeah. You might eventually forgive and forget the taxes, and the initial construction havoc and then it might start being a charming part of the area, but if it's *continuing to be a public nuisance* then... poor trolley.

KC - I know. The people who live in the loop are mainly students, I think, but Delmar also is a conduit through the typical Saint Louis mix of poor neighborhood abutting rich neighborhood which is next door to poor neighborhood by the tourist area, so rich people will drive on the side streets while poor people have to take the bus that plods behind the ten mile an hour trolley.