Summer Heat at the Arch 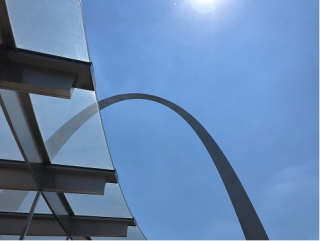 I knew it was going to be a hot day (over 90 Farenheit /32 Celsius), but I am so sick of being inside that I thought the heat wouldn't bother me. We went on with our plan to visit the Jefferson National Expansion Memorial Park ...

...which has thankfully just been renamed the Gateway Arch National Park.

I was fine walking the four blocks from the parking garage to the front doors of the new arch museum, but then we also wanted to see if the roof of the Old Cathedral had been repaired. It had been ripped up by a high wind on April 15, on the same day as the Notre Dame fire. We couldn't tell, since we were on the ground. If only there had been a high observation point nearby would could have taken some kind of tram up to ... oh.

After that we went down to the riverfront to see if the steamboats were running (nope, river too high for boats). That put us four blocks plus one national park away from our car. We got back by darting from shade tree to shade tree - and the shade trees were all newly planted during the park rebuild last year, so the give as much shade as a child's umbrella.

The heat didn't keep Gary from testing to see how hot it was by doing a typical tourist activity: touching the metal arch on a hot sunny day. 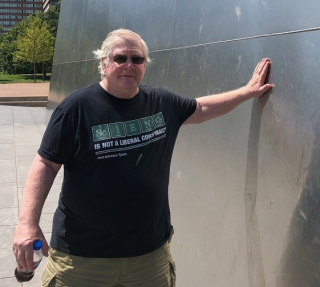 He reported that yes, it did feel very very hot, but he is a man and he can take it.

Posted at 07:23 AM in In Which We Mock Our Husband | Permalink