There is a video in the Saint Louis Science Center that discusses the science behind the Tacoma Narrows Bridge Collapse. 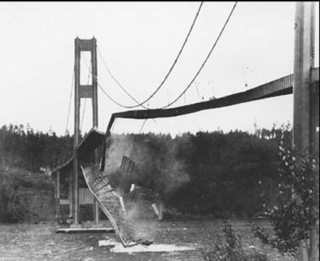 The science center video is narrated, and to add some drama to the dry theory of why the bridge fell, it tells the story of the last man to drive on the bridge, which you can read here. Short version: man is driving a family dog to his daughter, bridge begins to collapse, man runs ... and the narration ends with the dog dying. No details. Just, oh, that dog we mentioned, kids? It died.

Evidently introducing children to the mistreatment of dogs is a Saint Louis thing. I saw this at the new Arch museum:

Posted at 08:31 AM in Miscellaneous Mockery | Permalink

To be honest, leaving the family dog behind (likely with friends/family/neighbors) was probably a more pleasant outcome for said family dog than having to walk the entire way west, without shoes or moccasins, over cactus, sagebrush, and hot sand, so there's that.

(and the Tacoma Narrows Bridge is *bonkers*)

KC - I first learned about that bridge when it was used in a computer book example of a particular type of code problem - an invisible problem that has to fail utterly before you know the problem exists. They still debate the theory of what caused the bridge to fail, and that’s scary as well.

Yes, things like unexpected resonance frequencies are slightly terrifying; basically all these things behave according to how they ought to behave, which can usually be represented by a formula except have you actually included *all* the formulas in the equation you've built? And the answer to that question, for the real world, is pretty much always "no, and we don't even know what other real-world factors might slightly affect things and combine to more-than-slightly affect things" but also is *almost* always "but close enough." But only almost-always...

KC - I put such faith in scientists. When there’s a fatal error and everybody has done their best, it’s hard to accept.