Last week, while I was on "vacation," Gary didn't wake up before 2 pm and I stalked off on my own. I ended up at the Science Center and saw the Pompeii exhibit.

You walk through the statues of gods and goddesses, elect to view the Phallus Corner or not with its Pompeian phallus wind chimes, and then get a taste of what the earthquake was like with a movie complete with surround sound and a fog machine. Then the fog lifts to reveal a museum guide, standing in sillhouette, who tells you not to touch the dead bodies.

Technically, though, you'd be touching the volcanic ash encasing the dead body. 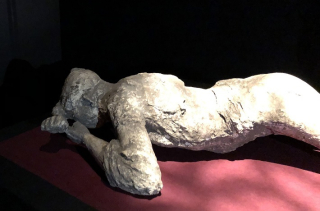 I was wondering why I felt so much more uncomfortable in this exhibit compared to the Body Worlds exhibit. You would think both groups were equal, just that one group had nothing over its organs and one had too much. I think it's because the skinned Body Worlds bodies were posed dancing, or enjoying leisure activities, while these bodies were  in genuine raw terror. It made me sad.  Not a good exhibit for the kiddies.

Posted at 08:54 AM in Miscellaneous Mockery | Permalink

Aren't the 'bodies' moulds made from the holes left in the ash after the flesh rotted away? I went to Pompei 40 years ago - it's pretty amazing. I seem to remember a fountain with an inscription saying who paid for its construction - plus how much he paid. And I bought a little painting copy showing a demonic cherub whipping the dolphins pulling his chariot. I hang it over the toilet in the hope that it will persuade men to sit down neatly instead of standing there looking at it.

Big Dot - the guide said that touchable parts of the exhibit were made of plaster of Paris and volcanic ash, and she mentioned that with one body the rib cage crumbled when they tried to move it. When she said “cast” I replied “cast, like when you make metal sculpture or jewelry” and she said “cast, like when you break your arm.” I think that’s why I thought they just tried to stabilize the existing skeleton by slapping a mixture on top - but of course, articles on-line do say specifically it’s a poured cast. So i guess they would find a skeleton, drill a hole, then pour in plaster, then chip off the volcanic ash. So I suppose she was right - you might be touching the traces of volcanic ash on top of the cast.
I am now fully prepared to make a cast if any skeletons are found in my backyard.