The Arch grounds have been improved. 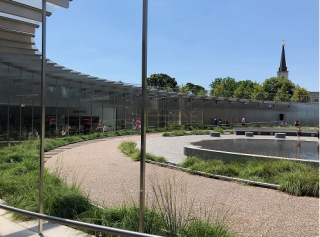 The old entrance is now the exit. It's still too easy to fall into.

The old Arch museum was entirely submerged, and small enough to fit between the Arch legs: 630 feet. It had a theater where you could watch a film on the building of the Arch, and air conditioning, and an old editorial cartoon arguing that the Arch looks like a giant croquet wicket.

The new Arch museum stretches from the highway to the Arch, and it must be ten times larger than the old museum. It’s big enough to include:

It is not big enough to include all the regret for taking the West from the Native Americans and Mexico. The museum designers finally dealt with the ugliness of our national expansion in what was formerly called the Jefferson National Expansion monument. At least the Louisiana purchase part of the country was paid for, everything else was grabbed from someone else.

Even as a Saint Louisian, I learned a lot. I didn't know (or had forgotten) that there was a steamboat fire that took out much of the riverfront and sparked a cholera epidemic. I didn't know that the Chouteau family didn't live on Chouteau, or any of the rest of the Chouteau family drama. I understand now how you can use a barrel to drink Mississippi mud water. I still don't understand why we flew the flag of Spain for a day after we were bought from the French in the Louisiana purchase.

The only improvement I would recommend is a spot where the air conditioning from the museum is blasted through the ceiling and flutters the grass to cool off the actual park.

Posted at 08:26 AM in Miscellaneous Mockery | Permalink