In addition to seeing Kinky Boots The Musical the Movie, we saw three other movies, because it isn't 90+ degrees in the movie theater.

Spiderman: Far from Home - this caused me a little emotional pain because it was filmed on location we'd been to during an earlier, more enjoyable vacation in London, and the contrast was great, given that I was not Far From Home. Still, I only fell asleep one time, and that's saying a lot for a superhero movie. (Nap time: Battle with the Fire monster.)

Annabelle Comes Home - (Again with the "Home" theme.) This was clearly this was part of a deal I made with Gary that if I went to see this dreck he would go with me to see Yesterday. If you don't like scary movies, you should go see Annabelle Comes Home. It is relaxing. I didn't even jump once. My right foot might have twitched in one scene.

SPOILERS AHEAD. The secret is that they used the same rhythm for every scene that was supposed to scare you:

If I had not just erroneously consumed a caffeinated beverage I would have been lulled to sleep. (Nap time: Any scene in the basement.) 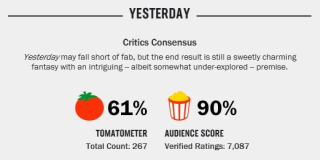 Those critics seem to complain that it was "silly" and did not do enough to honor the Beatles and their "legacy." Happily, no one in our theater was in the mood for a Beatles documentary. (Nap time: any rom-com scene.)

Posted at 08:35 AM in Miscellaneous Mockery | Permalink