Opera: Fire Shut Up In My Bones 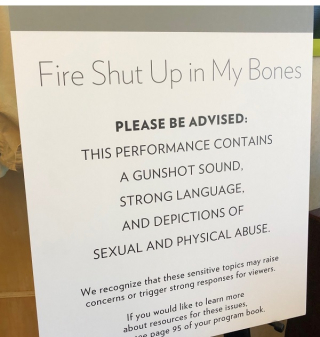 I loved the second half of this opera. Let's talk about the second half. It was poetry. There was ballet. Everything came together. Of course that was all at the expense of the first half, which needed to be devoted to setup and exposition, not so much with the parallels and the poetry that were to come.

The author was there. I spotted him before the curtain call, adjusting his socks. (Or touching his shins for luck: not sure.)

The music was jazzy and rambling, the singing was amazing. It's just that first half ... well, you know the bad stuff is coming for him as a child, so there's a lot of time in the first half spent worrying about every male relative. (I would apologize to Uncle Paul for doubting him, but I think the source book might implicate him.)

Now, in the second half, there are two ballets straightforward enough that even I "got it," and a very enjoyable part about getting laid. (I had no idea my "honey" had such restorative powers.)

I wonder how the author of the book feels about having his book turned into an opera? In a book, you can document your therapy in detail and it doesn't turn into a facile "Let it go" aria. Anne and I both want to read the book now.

Overall, I liked it ... no, can't "like" an opera based on someone's sexual abuse. I found it moving.

Posted at 07:47 AM in Miscellaneous Mockery | Permalink